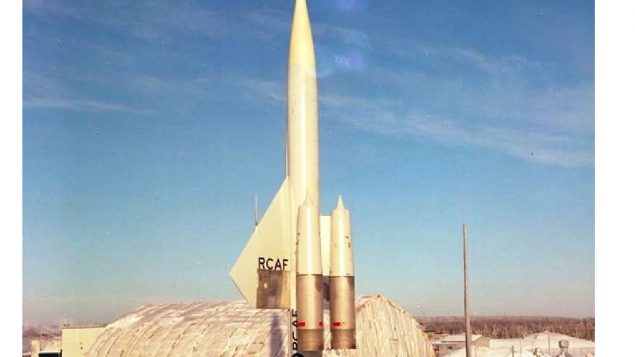 American Bomarc missile ready for launch at the North Bay, Ontario, RCAF station circa 1965. The issue of nuclear weapons and American control on Canadian soil, began on this date, The missile would launch with liquid fuel rockets and once at altitude ramjet engines would take over ( DND-pcn 3608)

In the late 1950s, the Cold War between the ‘West’ and the USSR was in full force. The threat of nuclear conflict and mass destruction on a global scale was a very serious worry as the ‘nuclear arms race’ was growing.

The concern of Soviet nuclear bombers flying over the Arctic to Canada and the U.S was a real concern.

In 1957 the Canadian government led by Progressive Conservative John Diefenbaker, signed a mutual defence agreement with the U.S. called the North American Air Defence Agreement (NORAD). This would put air defences for both countries under joint command for more rapid and efficient defence against Soviet air threats.

Canada was rapidly advancing on a magnificent new interceptor specifically to counter Soviet bombers. The first flight of this astounding new Avro Arrow jet took place in March of 1958 and in the following months showed promise beyond expectations. 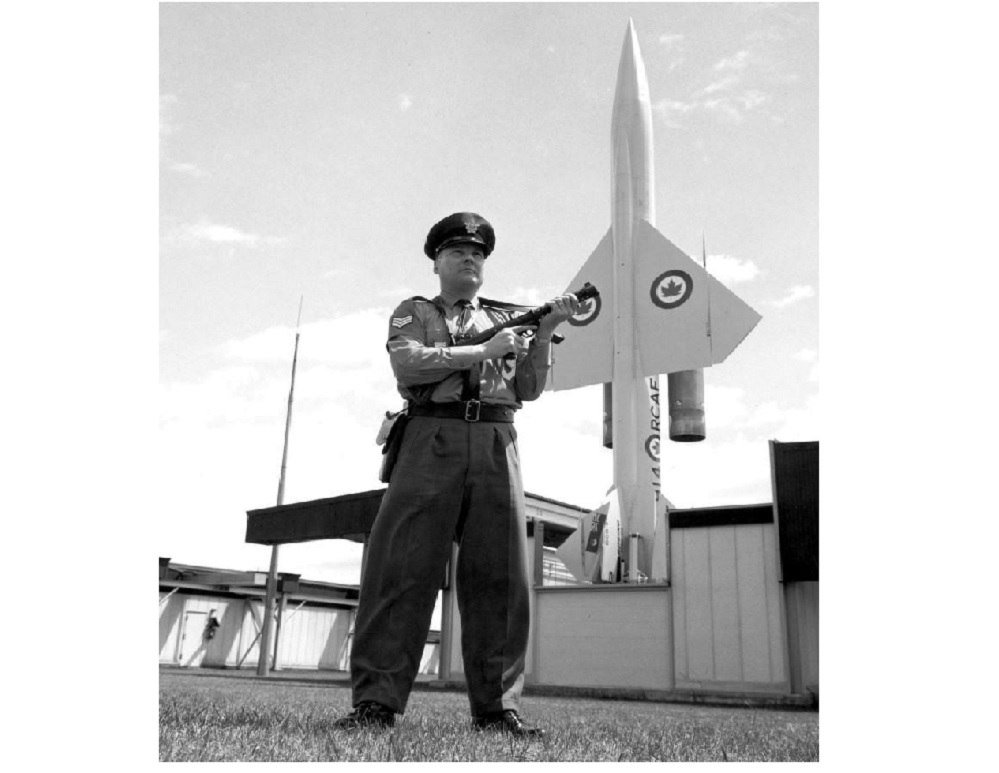 However, on this date, September 23, 1958, Diefenbaker announced in Parliament that Canada would accept 56 American ‘Bomarc’ missiles to be assigned to two RCAF bases in North Bay, Ontario, and La Macaza, Quebec.

This would be the beginning of a decade long often bitter debate and eventually help defeat the government. 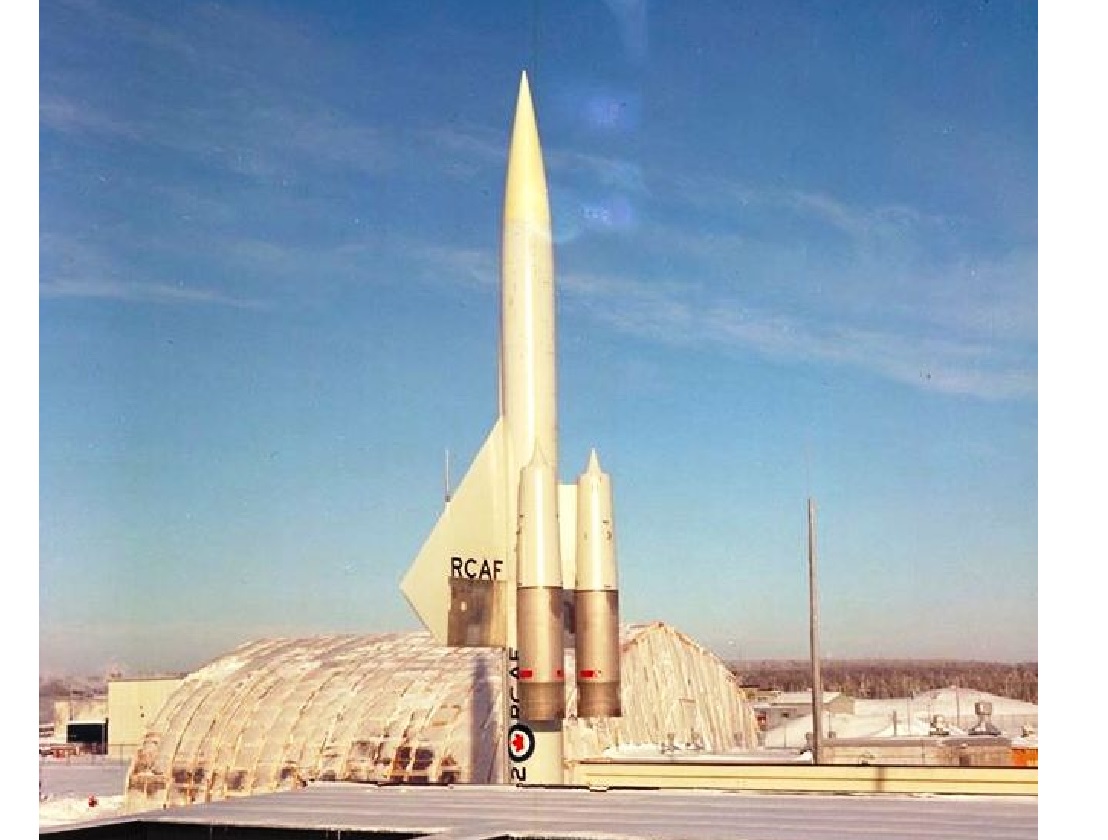 American Bomarc missile ready for launch at the North Bay RCAF station. The issue of nuclear weapons and American control on Canadian soil, began on this date, The missile would launch with liquid fuel rockets and once at altitude ramjet engines would take over ( DND-pcn 3608)

This was because what Diefenbaker did not tell Canadians was that the missiles were designed to carry nuclear warheads.

A few months later, citing spiraling costs and the idea that manned fighter interceptors were becoming outdated in an era of missiles the government also stopped all development of Canada’s world class Arrow in a move still controversial to this day.

In 1960 knowledge of the nuclear warheads became known. The idea of Canada harbouring nuclear warheads under U.S NORAD command had already divided the Diefenbaker government and led to anti-nuclear protests in a country mostly against the proliferation of nuclear weapons

The government failing to commit to accepting the warheads also led to a chill in bilateral relations.

Perhaps surprisingly, Lester Pearson, the man who invented U.N. peacekeeping, said his Liberal party would honour the NORAD treaty and accept the warheads.

In 1962, nuclear weapons were again a bitter issue due to the nuclearisation of NATO, as the government had (somewhat ironically) purchased U.S  F-104 jet interceptors and when deployed to Europe, again decided not to accept the nuclear bombs those planes would carry.

The debate raged on, and the Bomarc, Arrow, bilateral chill between Diefenbaker and President John Kennedy issues all helped to defeat the government in 1963.

The Liberals under Pearson then formed the government and on December 31 that year, the nuclear warheads were delivered to Canada. 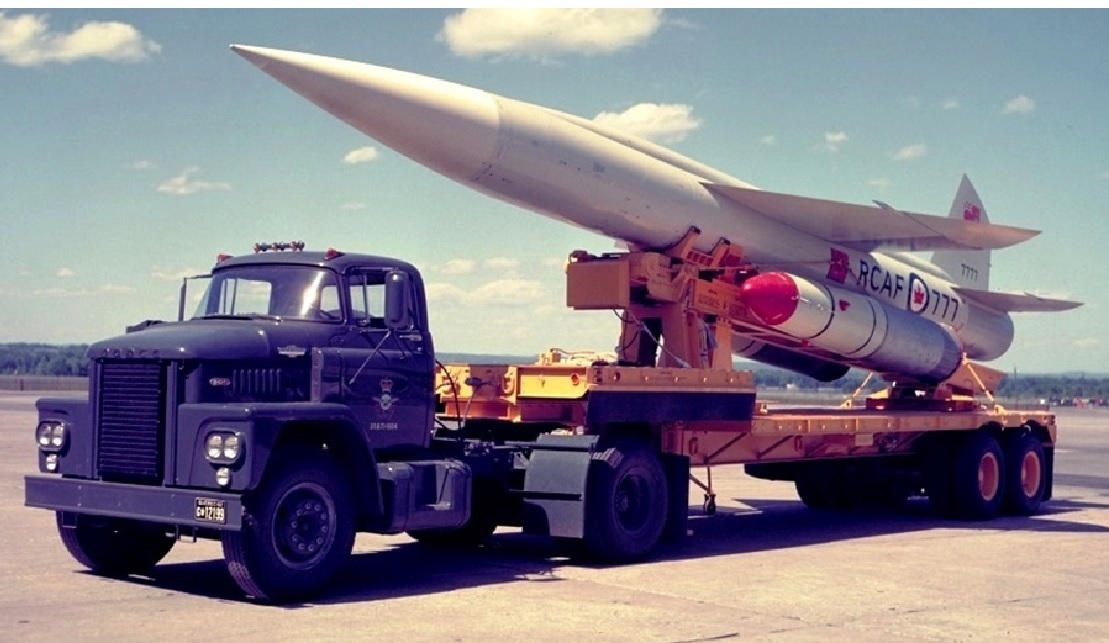 Although the Liberals under Lester B. Pearson accepted the nuclear role in 1968.

When Pierre Trudeau took over the party’s leadership, he was against nuclear proliferation and announced the following year Canada would withdraw from a nuclear role for its military. He signed the Nuclear Non-Proliferation Treaty which came into effectin 1970

As for the Bomarcs, with the advance of Intercontinental Ballistic Missiles (ICBM), their role as interceptors of Soviet bombers was deemed obsolete and they were phased out of service in 1971.

Perhaps also interestingly, to this day, the occasional Russian bomber (electronic surveillance) flies close to American and Canadian airspace in the far north, and manned fighter jets are still scrambled to intercept.

There are two examples left of Canadian issued Bomarcs–one at the Canadian War Museum in Ottawa and one at the Alberta Aviation Museum in Edmonton.