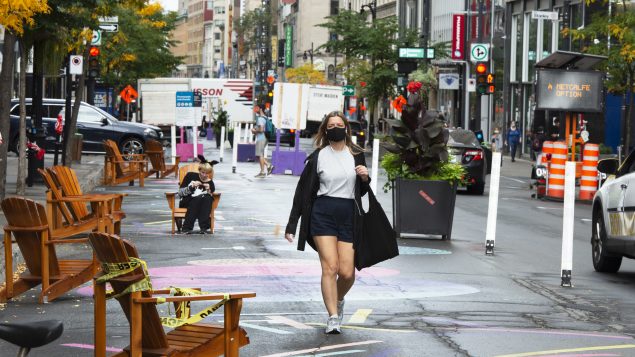 People are seen on St. Catherine Street, Monday Sept. 28, 2020 in Montreal as the city gets ready to be upgraded to red in Quebec's COVID-19 alert system. (Ryan Remiorz/THE CANADIAN PRESS)

COVID-19 cases continue to spike dramatically in Ontario and Quebec

Canada’s two most populous provinces–Ontario and Quebec–continue to be pummeled by COVID-19.

Figures released last Friday showed the number of people hospitalized with COVID-19 in the two provinces had jumped 44 per cent over the previous seven days, putting renewed pressure on provincial health care systems

And today, Ontario, which has seen the average number of new cases reported daily running four times higher than what it was at the end of August, set a new single-day record with 700 cases of the coronavirus being reported.

That’s the highest number of cases reported in a single day since the outbreak began in January and the highest one-day total since April 24, when 640 were reported.

Health Minister Christine Elliott said in a series of tweets that about 60 per cent of new cases today were found in people under 40 years old. 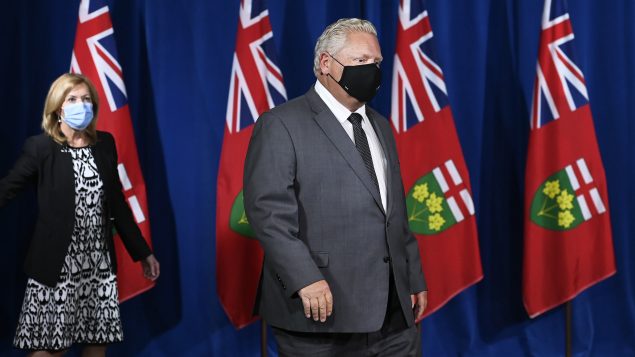 Ontario Premier Doug Ford, right, and Health Minister Christine Elliott arrive for a news conference at Queen’s Park during the COVID-19 pandemic in Toronto on Monday after the province set a single-day record with 700 cases of the coronavirus being reported. Ford called the spike “deeply concerning” but announced no new public health measures. (THE CANADIAN PRESS/Nathan Denette)

Ford said the province is experiencing a second wave of COVID-19 that has the potential to be worse the the first wave that arrived in the spring, adding that all options are on the table.

Meanwhile, neighbouring Quebec reported 896 new cases of COVID-19 on Sunday, its highest single-day since May, prompting health experts to urge the government to take more drastic measures in order to spare the beleaguered health-care system from further stress.

Early Monday evening, Premier François Legault announced that the Montreal region, the Quebec City region and the Chaudière-Appalaches region (east of Quebec City and known historically as the “Beauce”) would enter the maximum-alert level under the province’s COVID-19 colour-coded system, meaning that bars, casinos, reception halls, theatres, libraries and museums will all be closed for a 28-day period, effective Wednesday at midnight.

Restaurants will be limited to take-out only but other businesses will be allowed to stay open.

Furthermore, residents in affected zones will be prohibited from hosting anyone in their homes.

The announcement followed comments by Health Minister Christian Dubé, who called the situation “alarming,” on Sunday, saying the red alert would arrive “in coming days.”

On Monday, 750 new cases were reported in Quebec.

The uptick in Ontario cases came as new modelling suggested that Ontario’s second wave of COVID-19 will peak in mid-to-late October.

The CBC’s Mike Crawley reported Monday that the projected rising number of cases would likely force enough patients into intensive care units to cause hospitals to scale back non-emergency surgeries. 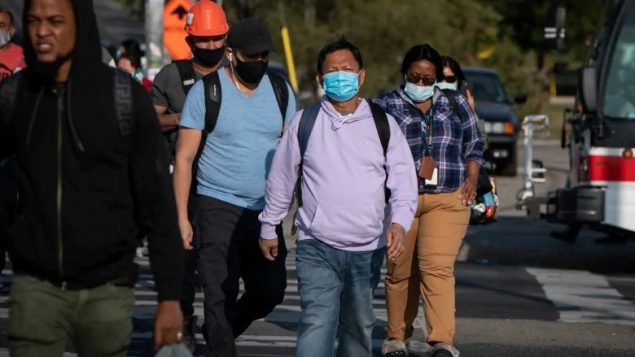 Researchers predict Ontario is on track to surpass 1,000 new daily cases of COVID-19 by the middle of October. (Evan Mitsui/CBC)

The model projects that Ontario is on track to exceed 1,000 new cases per day by the middle of October, unless stricter public health measures slow the accelerating spread.

With files from CBC News, Radio-Canada, The Canadian Press,