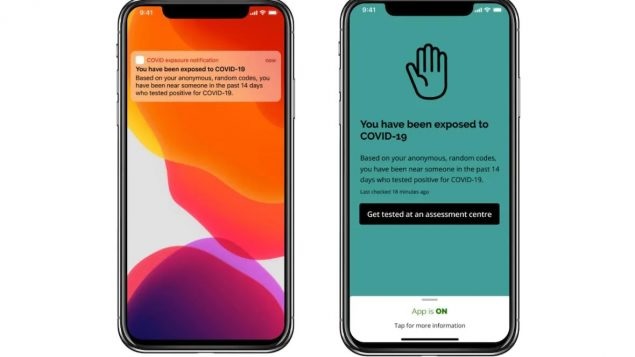 The new "COVID-Alert" app launched in late July first in Ontario and is now being used in four provinces, soon to be joined by Quebec as the fifth, Critics continue to raise questions about the effectiveness of such apps (Ontario Digital Service)

Canada released its COVID tracing app in July where it was first picked up in Ontario, Canada’s most populous province. Ontario is one of the provinces hardest hit by the virus. Adoption of the app has been instituted by  three other provinces, New Brunswick, Newfoundland and Labrador, and Saskatchewan. Manitoba, Prince Edward Island, and Nova Scotia may soon follow

Quebec, the province with the most virus cases and deaths, was initially reluctant to adopt the federal app saying a “made in Quebec’ option was being developed.  With a recent sharp increase in cases in both Quebec and Ontario, Quebec has reversed its position and says it will now use the federal COVID Alert app. 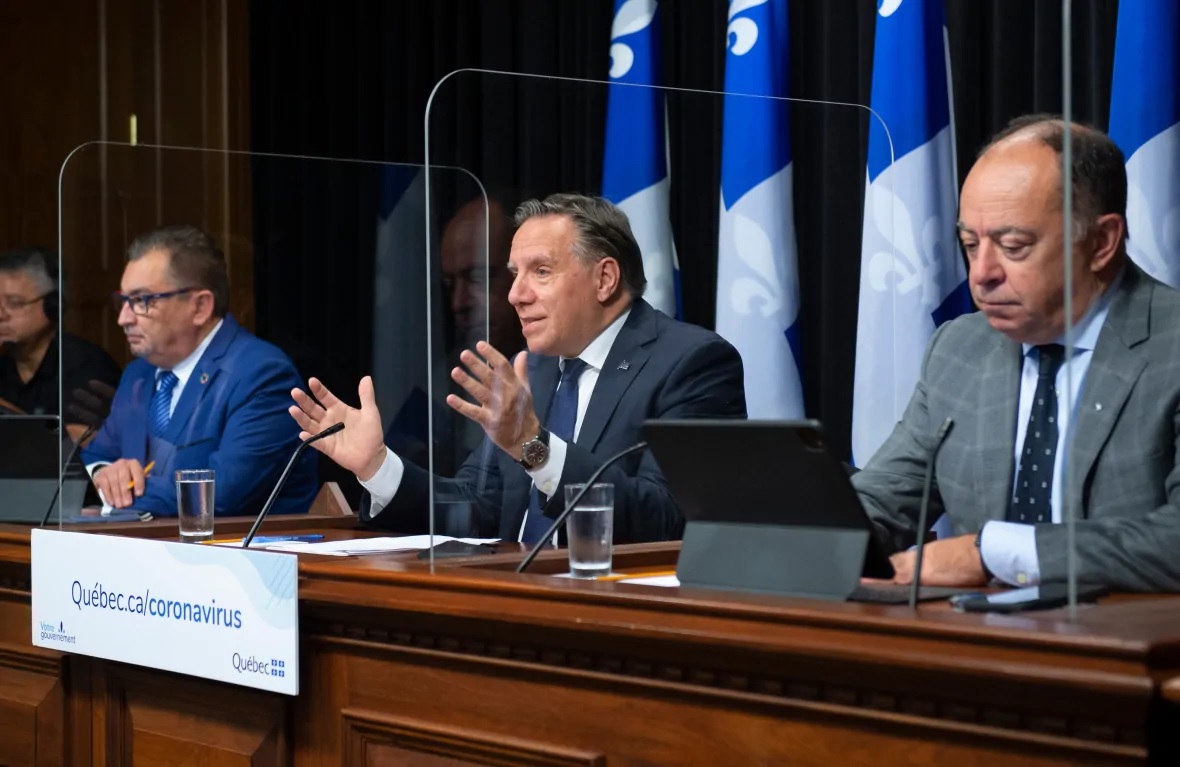 Quebec Health Minister Christian Dubé, right, said he was in the process of finalizing details about adopting the federal app. Quebec Premier, Francois Legault (centre) also urged young people to download the app, noting that the under 30 age group is now testing positive at a high rate for the virus (Jacques Boissinot/The Canadian Press)

Downloading the app seemed initially popular with some 2.2 million downloads but has slowed although the Canadian government said there was an uptick after renewed calls to download the app in Prime Minister Justin Trudeau’s recent televised speech to Canadians. The government now claims some 2.9 million downloads in this country where the population in the four provinces currently using the app is about 17 million.

However downloads  to detect the possible risk from exposure to infected people are only one half of the equation. It also requires the condition of infected people to be uploaded. So far, of those provinces only 514 people in Ontario have listed themselves as having tested positive for COVID, but to date no-one from any of the other provinces has done so.

Recently, Blayne Haggart, Brock University associate professor of political science wrote in ‘The Conversation‘ that the government’s public message about the privacy of the Canadian app seemed secondary to considerations of its medical effectiveness and the government website also has no information about  how effective it might be in reducing the virus spread. 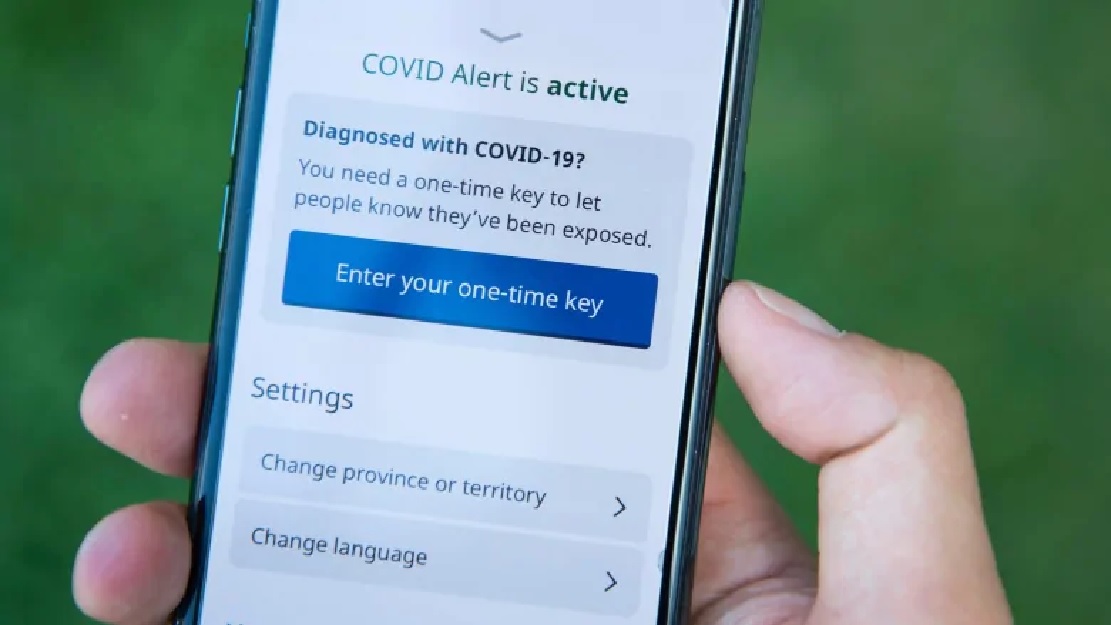 The COVID Alert app is seen on an iPhone. The app tracks the locations of phones relative to other phones, and notifies users if they have been in proximity to another app user who has tested positive for COVID-19. Of the almost 3-million downloads to date, only 514 people of the many thousands of positive cases, have uploaded their test results (Justin Tang/The Canadian Press)

He also said that Health Canada is still deciding how to evaluate it adding there is no criteria to judge its success or failure in ‘flattening the curve’ of infection rates.

Another media outlet ‘The Logic’ reported on August 7 that the federal government was spending $10 million to promote the app but had no threshold below which it would be declared ineffective. 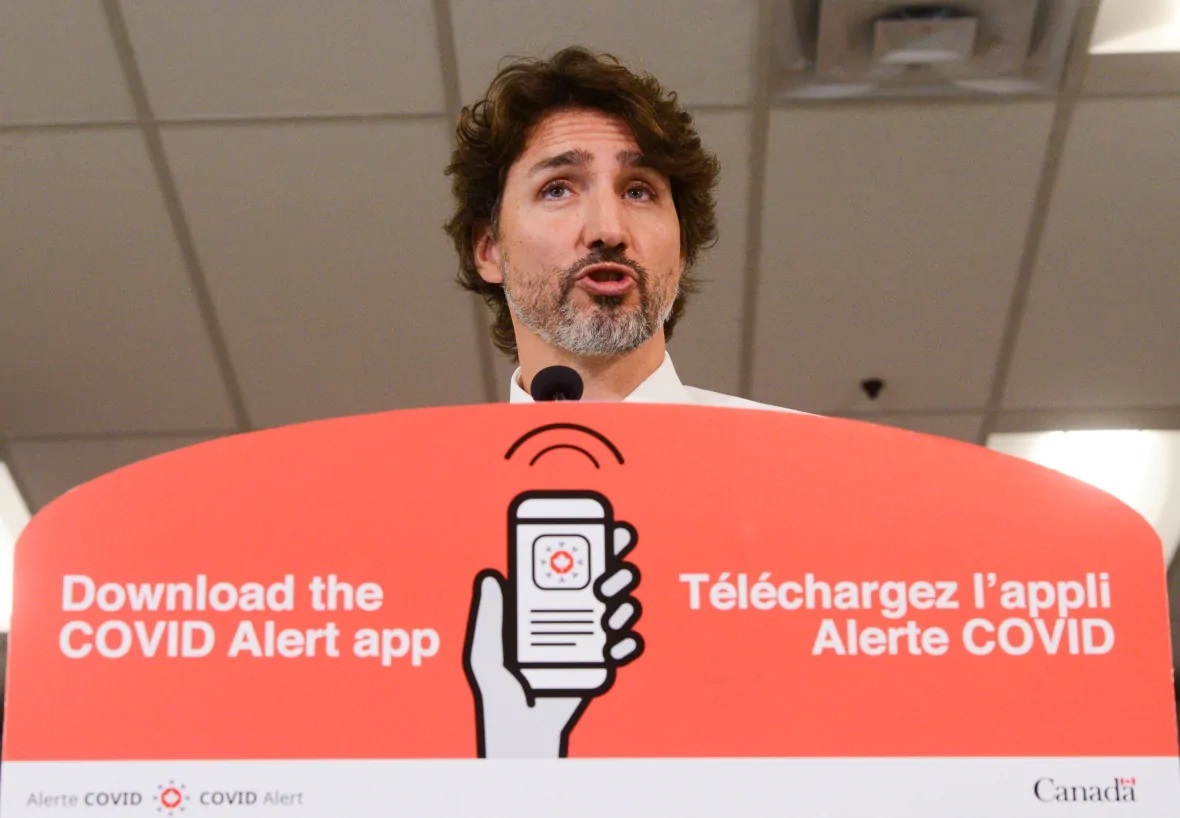 Prime Minister Justin Trudeau recently called once again for Canadians to download the COVID tracing app,. Estimates of the percentage of a a population needing to use the app for tracing to be effective vary from 40% to 95% (Sean Kilpatrick- CP)

In April an Oxford University study said to have a real effect some 60 per cent of the population would have to be using a tracing app but added lower uptake can still be useful.  Other sources say 40 per cent.  Several countries now using tracing apps have seen downloads of less than 40 per cent.

However,  University College London study published in the highly respected British medical journal The Lancet-Digital Health published on August 19 found uptake of the app would need to be much higher and found that so far there was nor hard evidence to show the apps effectiveness

The study noted, “No empirical evidence of the effectiveness of automated contact tracing (regarding contacts identified or transmission reduction) was identified. Four of seven included modelling studies that suggested that controlling COVID-19 requires a high population uptake of automated contact-tracing apps (estimates from 56% to 95%), typically alongside other control measures”.

A France24 news story noted that by mid August the app in that country had been downloaded 2.3 million times in a country of 67 million with a mere 1.169 users declaring themselves positive and only 72 possible risk encounters being identified.

The news story also reports that in the hard hit country of Italy, excluding the number of people without mobile phones, only about 14 per cent of potential users had downloaded the app up to August 31 and only 155 people had indicated their COVID positive status.

In Germany with its more that 80-million population the app there has been downloaded 17.2 million times as of mid-August but because of the design, there is no information available on how many notifications have been sent.