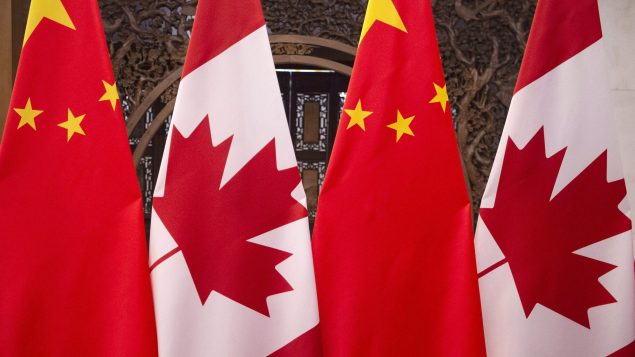 This Dec. 5, 2017, photo shows flags of Canada and China prior to a meeting of Prime Minister Justin Trudeau and Chinese President Xi Jinping at the Diaoyutai State Guesthouse in Beijing. (Fred Dufour/THE CANADIAN PRESS/AP, Pool Photo)

During a news conference on Tuesday, Trudeau criticized Beijing’s human rights record while marking the 50th anniversary of Canada’s diplomatic ties with China.

“We will continue to work with China for advancing Canadian interests and Canadian producers,” Trudeau said.

“At the same time, we will remain absolutely committed to working with our allies to ensure that China’s approach of coercive diplomacy, its arbitrary detention of two Canadian citizens, alongside other citizens of other countries around the world is not viewed as a successful tactic by them.”

Trudeau said Beijing’s actions have put a significant strain on Canada-China relations and Ottawa is concerned for the protection of human rights in places like Hong Kong.

“We’re going to continue to work with our fellow like-minded nations around the world to impress upon China that its approach to internal affairs and global affairs is not on a particularly productive path for itself or for all of us,” Trudeau said. 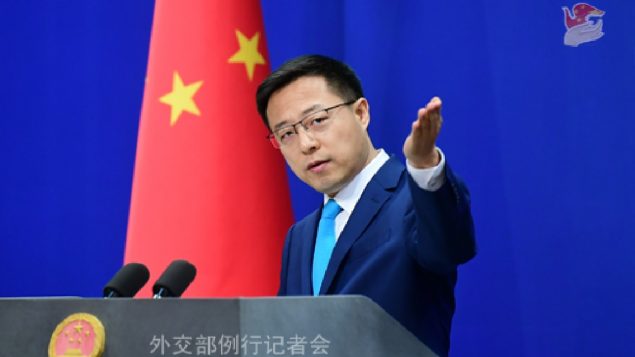 Chinese Foreign Ministry spokesman Zhao Lijian said on Wednesday the Canadian government had shown hypocrisy and weakness in its dealings with China. (PRC)

Zhao Lijian, the spokesperson for the Chinese foreign ministry, said the Canadian government had shown hypocrisy and weakness.

“We firmly deplore and oppose the Canadian side deliberately confusing right and wrong and once again making erroneous comments, and we have lodged stern representations,” Zhao said Wednesday.

Meng was arrested in Vancouver upon the request of U.S. authorities. The 48-year-old daughter of Huawei founder Ren Zhengfei is wanted in the U.S. on charges of committing fraud related to the company’s dealings with Iran.

Former diplomat Michael Kovrig and businessman Michael Spavor were arrested in December 2018, in what was widely regarded as a retaliatory move for Meng’s arrest in Canada.

The two men, known as the Two Michaels, have been charged with espionage.

Beijing has also piled economic pressure on Canada by effectively stopping imports of some key commodities such as canola.

“I must point out that it is hypocritical and weak for the Canadian government not to face up to the above-mentioned facts and not to tell their people the whole truth,” Zhao said.

“We once again strongly urge Canada to correct mistakes, immediately release Ms. Meng Wanzhou and ensure her safe return to China, remove this barrier in China-Canada ties, and bring the bilateral relationship back on the right track.”

Trudeau has steadfastly refused to trade Meng for Kovrig and Spavor, arguing that such a move would embolden Beijing and endanger the security of millions of Canadians working and living abroad.