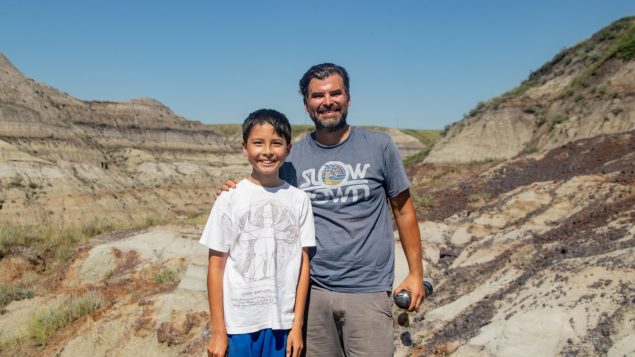 Dion and Nathan Hrushkin at the Nordwell property (Photo by NCC)

A Canadian conservation group says the discovery of a rare juvenile dinosaur by a father and son duo hiking in an isolated canyon in Alberta prairies in July demonstrates the benefits of nature conservation not only for the living species but also for preserving the planet’s natural heritage.

The Nature Conservancy of Canada (NCC) announced Thursday the discovery of a dinosaur skeleton found by 12-year-old aspiring palaeontologist Nathan Hrushkin and his father, Dion, at its Nodwell property at Horseshoe Canyon, near Drumheller.

The Hrushkins discovered the partially exposed bones while hiking on the conservation site located about 135 kilometres northeast of Calgary.

They logged the location of the bones and sent photos of their find to the Royal Tyrrell Museum. 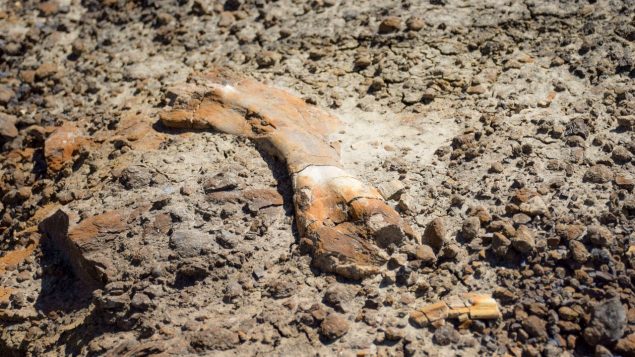 The first bone discovered at the Nordwell property (Photo by NCC)

Palaeontologists working at the museum identified the bones as belonging to a young hadrosaur, commonly known as a duck-billed dinosaur.

Because fossil reports from the Horseshoe Canyon area are rare, the museum sent a team of researchers to the conservation site.

Since Hrushkin’s find, palaeontologists have uncovered between 30 and 50 bones in the canyon’s wall, the NCC said. The bones, which are estimated to be about 69 million years old, were removed in protective jackets made of burlap and plaster and taken back to the museum lab for cleaning and research.

The NCC says that all of the bones collected belong to a single specimen, a juvenile hadrosaur approximately three or four years old.

“This young hadrosaur is a very important discovery because it comes from a time interval for which we know very little about what kind of dinosaurs or animals lived in Alberta,” said in a statement François Therrien, curator of Dinosaur Palaeoecology at the Royal Tyrrell Museum of Palaeontology.

“Nathan and Dion’s find will help us fill this big gap in our knowledge of dinosaur evolution.” 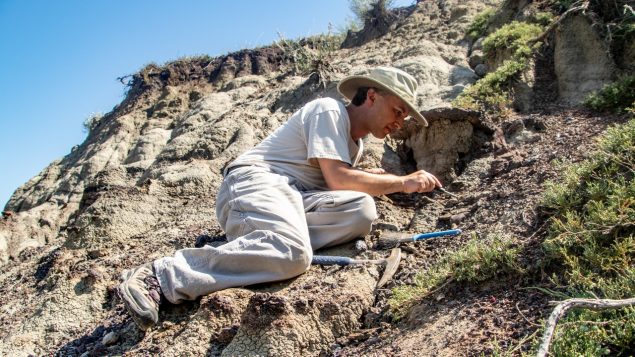 François Therrien, curator of Dinosaur Palaeoecology at the Royal Tyrrell Museum of Palaeontology, working to unearth the dinosaur bones at the Nordwell property. (Photo by NCC)

Nathan, in the meantime, is hoping the find lays the foundation for his future career as a palaeontologist.

“I’ve been wanting to be a palaeontologist for six or seven years,” Nathan said in a statement. “I am fascinated about how bones from creatures that lived tens of millions of years ago become these fossil rocks, which are just sitting on the ground waiting to be found.”

The NCC says the father and son duo are a perfect example of what to do when someone discovers fossils: take photos of the bones, record their location using a GPS or Google Earth, report the find to the Royal Tyrrell Museum and, most importantly, leave the fossils undisturbed in the ground.

The latter is the most important step, palaeontologists say, as fossils in Canada are protected by law and much information is lost when they are removed from their location.

The 130-hectare Nordwell conservation property is named after Leila Nodwell, who’s family bought the western half of the canyon in her memory and subsequently sold it to the NCC.