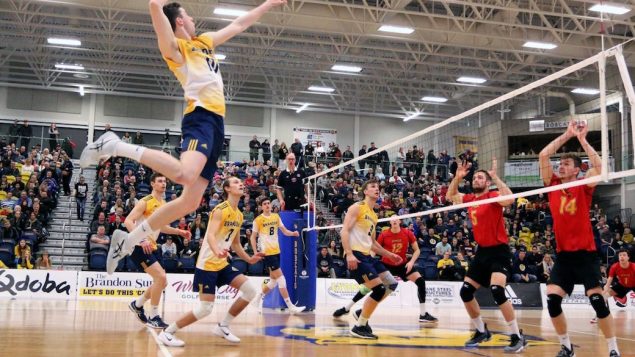 Brandon Manitoba outside hitter Elliot Viles was honoured as U SPORTS men’s volleyball Player of the Year in 2019. Trinity Western of British Columbia won the championsip in Quebec City in front of 2,000 fans There will be no crowds of fans and no national university championships however this year due to COVID. ( U SPORTS)

Except for the years of the two world wars, for the first time there will be no national university champions, and the first time since U Sports began in 1961.

The U sports nationals are considered the highest level of competition in Canada, just below those of national teams or Olympic sport.

The cancellations of nine winter championships in nine locations across the country has left the 56 member institutions and about 20,000 athletes with no national competition this winter in male and female indoor events in basketball, hockey, swimming, track,volleyball, and wrestling

Dick White, the interim chief executive officer of U Sports. explained the decision saying “It is not logistically possible for teams to be travelling across the country at this time.”. The travel concerns were coupled with other restrictions regarding gatherings indoors.

Dr. Taryn Taylor, U SPORTS Chief Medical Officer said, “As the number of cases rise during the second wave of COVID-19, and without an available vaccine, on-going sports restrictions are required to ensure student-athlete health and safety.”

Though national events have been cancelled, there are discussion in some conferences about regional play and alos differing conditions for team vs individual sport.

Meanwhile , international competitions which had been scheduled for Canada have been cancelled and some moved to other locations.

The Lake Louise resort in Alberta was to be the site of international downhill and Super-G skiing events for late November have been cancelled with races moved to Europe, However the over 30 events each in men’s and women’s skiing are all  under some doubt and depend on the evolving COVID situation which is  also increasing in Europe

When Skate Canada cancelled its event for  October 30-31, it has almost ended  the Grand Prix season for almost every Canadian skater. Normally skaters can enter any two events with their top six results afterward enabling their qualification for the final. This year competitors were limited to one event close to home to reduce travel because of COVID,  The next opportunity will be in January in Vancouver which will determine who goes to the World event in March in Sweden.  Meanwhile Australia has cancelled the Four Continents competition set for February.

Sliding events in Canada have been cancelled with bobsleigh, luge and skeleton mostly being held in Europe set to start in November.

Several curling events have been cancelled, and some still on the schedule may well be held without spectators similar to other sporting events.