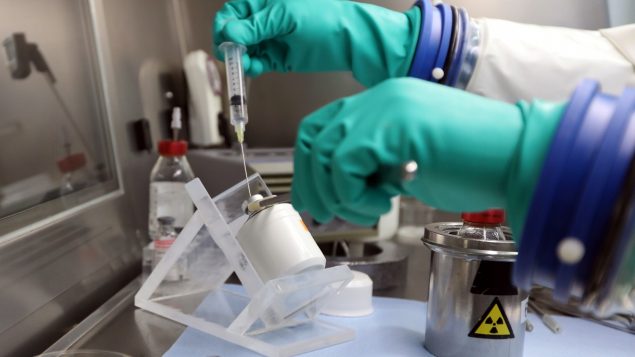 A medical nuclear analytical assistant at the Rotterdam Erasmus Medical Center mixes a preparation of raw material Lutetium Chloride and Lutetium Octoraat, a medicine used to treat patients with a rare form of cancer, in Rotterdam, Netherlands, Feb. 28, 2019. (Eva Plevier/REUTERS)

Sales of cancer medicines in Canada nearly tripled over past decade: report

Sales of cancer-fighting medicines in Canada have nearly tripled over the past decade, reaching $3.9 billion in 2019, according to a report by the federal Patented Medicine Prices Review Board.

According to the Oncology Medicines in Canada chartbook released by the board, cancer-fighting drugs now account for nearly 15 per cent of all pharmaceutical spending in Canada.

The report also shows that the market for oncology medicines has shifted toward higher-cost drugs. Medicines with 28-day treatment costs exceeding $7,500 now account for more than half of overall Canadian oncology sales, the report notes.

According to statistics compiled by the federal government, cancer is a leading cause of death in Canada, accounting for nearly a third of deaths across the country.

The report also notes that given Canada’s aging population and several new cancer-fighting drugs under development, the fast-growing market for these medicines is expected to continue to be an important consideration for Canadian patients, prescribers, and payers in years to come.

In fact, introduction of new cancer-fighting drugs is one of the driving forces behind the growth in pharmaceutical spending in Canada, the report says. Drugs introduced after 2010 accounted for 58 per cent of oncology sales in 2019, compared to 24 per cent of non-oncology sales.

Availability of top-selling new cancer-fighting drugs in Canada is in line with levels in countries that are members of the Organisation for Economic Co-operation and Development (OECD), the report says.