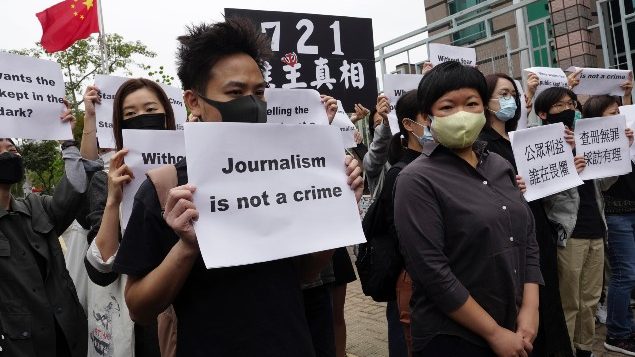 Supporters pose with Hong Kong journalist Choy Yuk-ling (yellow mask) before entering court on Nov. 10, 2020. Although the charges were unrelated, they came after she helped produce a documentary on Hong Kong police behaviour during protests last year. (Vincent Yu/AP Photo)

Canada must act with other democracies to protect Hong Kongers: expert

Canada is not in the same league as China and cannot act alone to protect the people of Hong Kong, said Steve Tsang, in a phone interview today. Tsang is a political scientist at the University of London’s SOAS China Institute and a renowned expert on Hong Kong. He presented his views to a Canadian parliamentary committee on Canada-China relations.

Tsang’s view is that Canada has 300,000 citizens in Hong Kong who need protection from China’s tightening of control and criminalization of dissent. China has imposed a national security law which gives it the power to arrest people in Hong Kong and try them in China. This contravenes a treaty which the Chinese government signed when Britain ceded the territory guaranteeing local autonomy and civil liberties until 2047.

Tsang said Canada should coordinate with other democracies to pressure China to honour its commitment. He notes that between them, Canada, Britain, Australia, New Zealand, and the United States have almost four million citizens in Hong Kong making up half the population. Many of them contribute to the economic lifeblood of the region and are vital to its continued prosperity. “You (China) don’t want to kill Hong Kong,” said Tsang. “You don’t want half of its people to leave.”

If a coalition were to include the European Union and Japan it would be all the more powerful as the EU is China’s biggest trading partner and Japan is its second most important.

“For something like this, you need the Americans on board,” said Tsang noting that it was difficult for allies to coalesce around this issue without the support of the United States under President Donald Trump. But chances are likely better once Joe Biden becomes president. 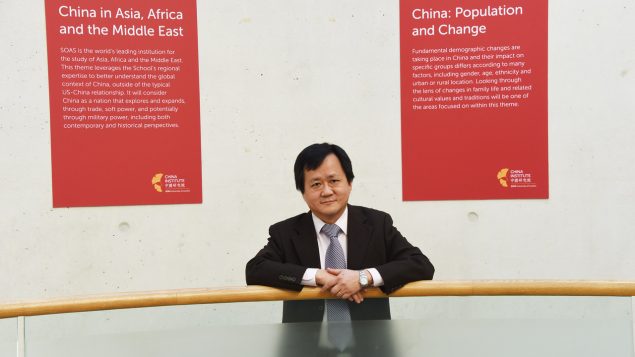 Prof. Steve Tsang says that five English speaking democracies who have citizens in Hong Kong would have ‘a lot of leverage’ if they worked together. (SOAS China Institute, University of London)

Hong Kong could set an example

Tsang said it is important that democracies stand together in terms of defending democratic values.  “An emerging, new super power must understand that it cannot simply dictate  matters, that it will get push back…(China must understand that) ‘You have signed an agreement. We expect it to be honoured. If not how do we know that other agreements will be honoured?’”

Tsang believes that if a broad coalition of countries a stand on Hong Kong, that might make China more cautious about its relationship with Taiwan. China has repeatedly said Taiwan is part of China and it has been more aggressive in its threats to make that a reality.