This freezer holds moose meat that will be distributed to a food bank in Newfoundland. (Barry Fordham)

There is a tradition in the eastern province of Newfoundland and Labrador where hunters share the meat from moose they harvest with friends and family. This year they will be allowed to extend the sharing to food banks serving people in need.

The idea took hold in 2008 when hunter and conservationist Barry Fordham was looking through some magazines and saw an article about hunters in the United States contributing a portion of their catch to food banks. Then, Fordham and his daughter Chloe noticed a similar program in their neighbouring province of Nova Scotia and they thought why not start one in Newfoundland.

Over many years, Fordham wrote numerous letters and emails to government officials to get them to allow this, but to no avail.

Food banks are short of protein

It was later, in an encounter with food security advocate Debbie Wiseman, that she suggested he lobby officials hard on the fact that food banks offer mostly packaged foods and lack protein sources. A petition was launched supporting the idea of allowing hunters to give moose meat to food banks. The petition garnered 1,000 signatures in less than a week. Where previous cabinet ministers had not shown much interest, the new Minister of Fisheries, Forestry and Agriculture Elvis Loveless embraced the idea. Permission was granted for hunters to contribute moose meat to food banks, and the food banks in turn were allowed to seek permits to stock the meat. 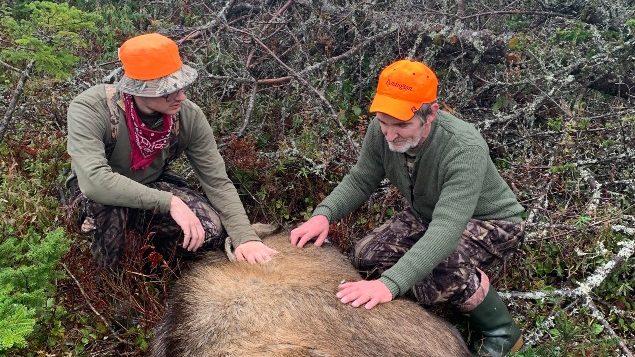 “My son and I are paying respect to the animal,” said Barry Fordham, noting the value of his son learning a life lesson in harvesting a moose and providing meat to people in need. (Barry Fordham)

The 2020 moose hunting season in Newfoundland began September 12 and ends December 31. Hunters are allowed to contribute meat to food banks until January 7, 2021.

Fordham, who has set up an organization called Sharing the Harvest NL, is asking hunters to donate five pounds (2.27 kg) of meat from the moose they harvest.. About 31,500 permits are issued to hunters to bag one moose each and just over half will be successful. Fordham calculates that if most hunters contribute a portion of frozen meat to food banks that could yield 7,200 pounds of meat (3,265 kg).

Fordham took his 18-year-old son Shane out hunting yesterday. He successfully bagged a moose, they field dressed it and will contribute 200 packages weighing between 1.5 and 2 lbs (under a kilo). The packages will go to three food banks in the capital St. John’s, one serving single parents and another Indigenous people in need. He hopes food banks across the island of Newfoundland will benefit from such donations.

Fordham is glad his son had the experience of harvesting a moose and taking all the steps so that it will become valuable food for people in need.

“It’s a valuable life lesson for a young hunter,” said Fordham. “The camaraderie, hunting as a family…and seeing the full circle.”