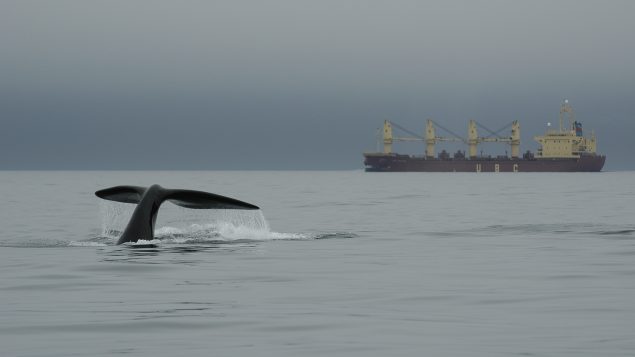 A right whale in the vicinity of a large vessel in the Bay of Fundy. Rules to slowdown large ships is still not enough to avoid fatality according to a new study (Yan Guilbault/Anderson Cabot Center, New England Aquarium. Collected under Canadian SARA permit)

The latest figures estimate there are likely fewer than 366 northern Right whales left. In the past few years they and others have been killed after being entangled in fishing gear, and by ‘ship strikes’.

It has often been presumed that whales are killed in collisions by large, fast-moving ships. Canada and the U.S. have both instigated measures to reduce ship strikes by requiring slower speeds for large vessels in certain areas and changing traffic patterns when whales are present.

However, based primarily on information about Right whales, a new analysis by researchers at Dalhousie University in Halifax shows that even at a slow speed of 10 knots a collision with a large ship is likely to be fatal. 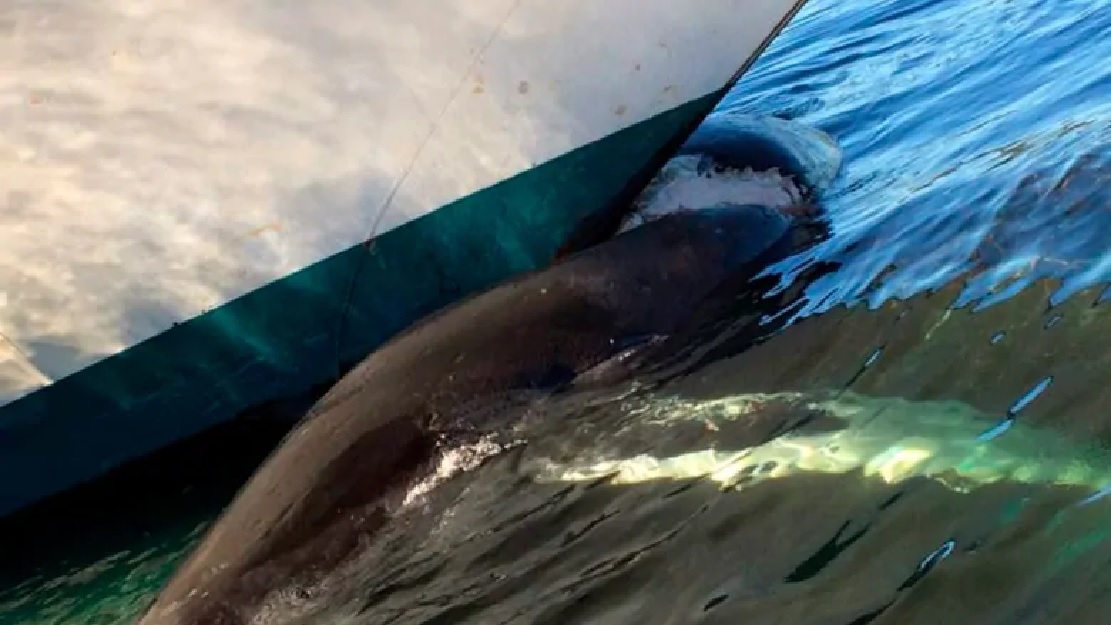 Authorities said they found the dead humpback whale on the submerged, bulbous bow of the Grand Princess after it entered the harbor in Ketchikan, near the southern tip of the Alaska Panhandle in August 2017. Several similar tragic photos can be seen in a search of the internet. (Fred Burk/NOAA Office of Law Enforcement via AP)

It also shows smaller ships of less than 20 metres in length can inflict serious, or fatal injuries.  The study notes, “These smaller vessels generally do not use automatic identification systems (AIS), thus producing less track-data compared to larger vessels and they are not subject to the regulations to mitigate ship strike lethality (Transport Canada, 2018)”.

It goes on to say many of the smaller fishing vessels operate in coastal waters while whales are present adding that it is a mistake for authorities to focus solely on large vessels in efforts to mitigate harm to whales.

The study notes that often an impact from a large or small vessel might well be such that it will not break bones in the whale, but can still cause fatal internal damage. 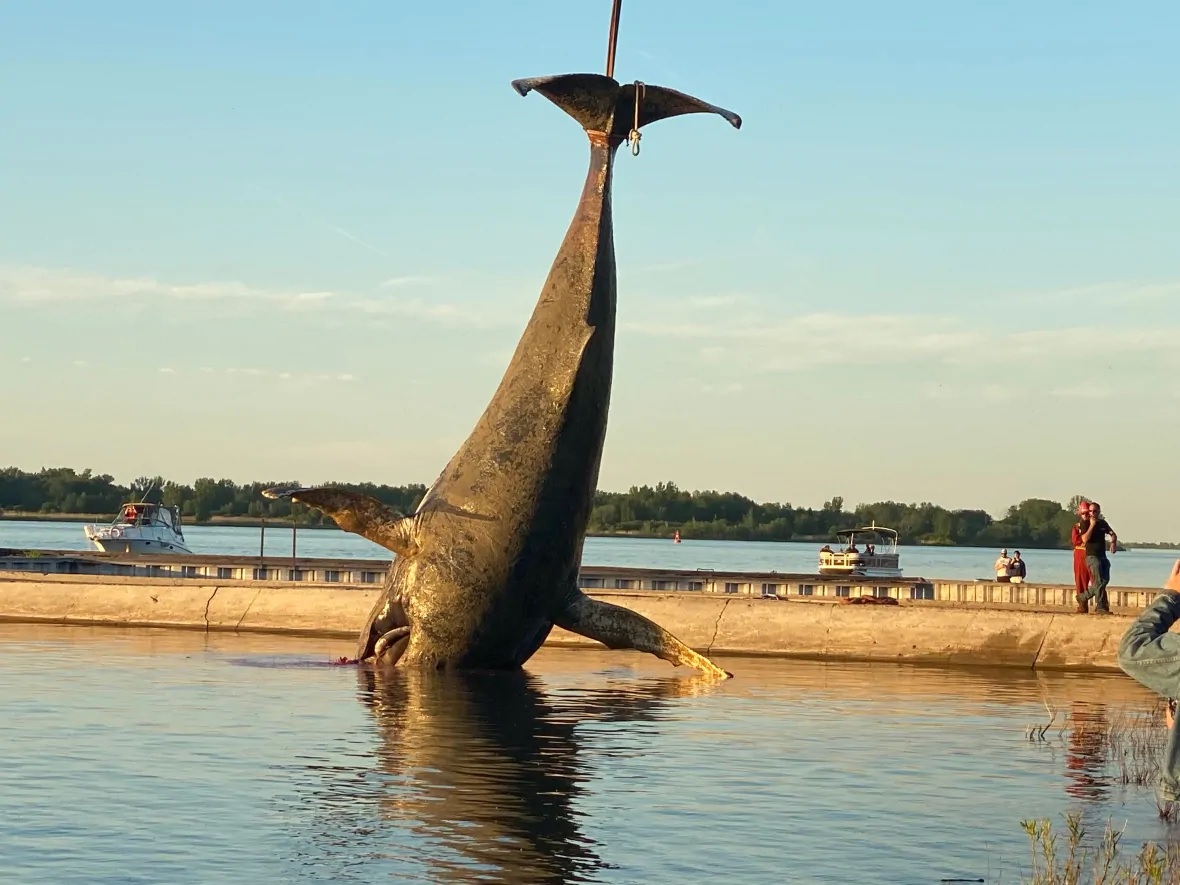 A young humpback whale which had been cavorting in Montreal harbour early this summer to the delight of many was later found floating dead downstream. Initial cause of death was uncertain as there were no obvious signs of trauma. A later necropsy found internal bleeding from a ship strike
(Simon Nakonechny-CBC)

Based on several other scientific studies, and reported observations of collisions, it goes on to use technical mathematical formulas to demonstrate various scenarios for collision lethality. Unlike other studies based on mere statistical values of vessel speed, this study also took into account the mechanical stresses of a collision of vessel speed, whale length, mass of whale, mass of ship, water resistance, impact area, blubber thickness, and various other formulas to show how such collisions can prove fatal.

The report also says that where observations state the whale appeared to be swimming normally after a strike, it may in fact die later from the injuries. It also that taking all the various factors into consideration, the result from a collision with a ship of 300 tonnes was virtually the same as a strike from a 30,000 tonne ship. While the typical inshore fishing boats (Cape Islander style) of  approximately 13 m (45ft)  and speeds slower than cargo vessels, still have sufficient mass to potentially inflict a fatal injury. 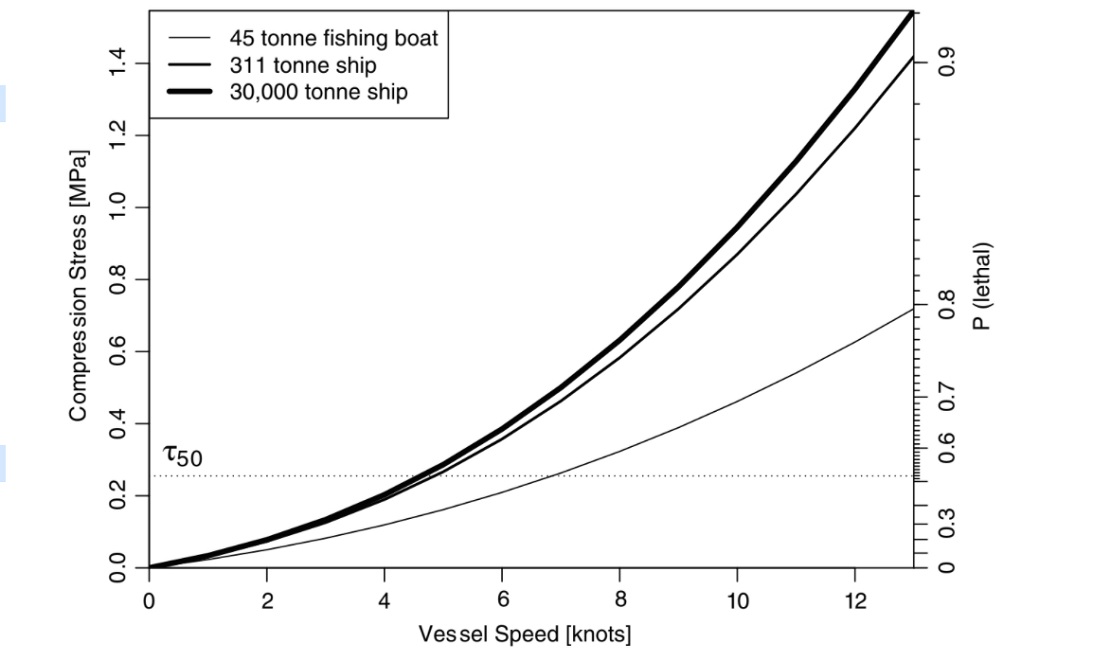 Variation of maximum compression stress with ship speed according to the four-layer model (skin, blubber, sublayer, bone), for
vessels of mass 45, 311, and 30,000 tonnes. The impact area for the 45-tonne fishing boat was set to1.32 m2, while for the larger ships, with protruding bulbous bows, it was set to 0.88 m2. Default values are used for all other parameters. The horizontal line shows τ50, the stress yielding a 50% probability of lethality (Kelley-VlasicBrillant-Dalhousie U)

The study notes that at almost any

transiting speed a whale collision with a large vessel is likely to result in a lethal injury, and that the proposed speed limit of 10 knots on large ships does not significantly reduce the likelihood of a fatality. The study reveals in fact that vessels of all sizes pose threats of injury or death in a collision with a whale.

It says to prevent or reduce harm, shipping exclusion areas for vessels could be established, altered shipping lanes, and revised traffic separation schemes.  For smaller vessels, slower speeds in areas where there may be whales is suggested along with crew posted as lookouts. The report says with slower speed, spotters, and the greater maneourevabiliy of smaller vessels, evasive action can be taken to avoid a strike.