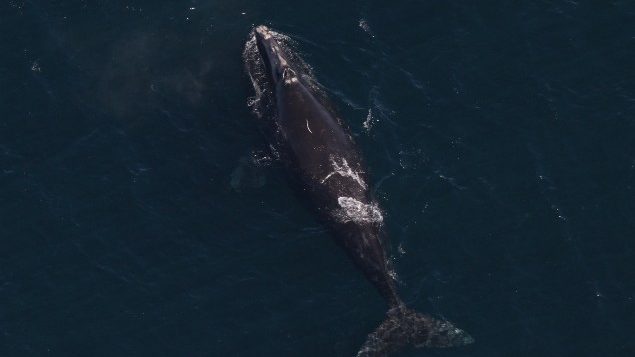 Curlew was named for the white arched scar on its back that looks like the long beak of the species of sandpiper shorebird by that name. (Center for Coastal Studies, NOAA Research Permit #14603-01)

Eighteen North Atlantic right whales have been given names and playful biographies in a bid to help scientists recognize them and to help people develop a connection with them.

The Canadian government, fishers and environmental groups in both Canada and the United States are making concerted efforts to reduce the considerable risks to these whales which are critically endangered and only number a little more than 350. These whales spend time in the northeastern U.S. and in Canadian waters of the Gulf of St. Lawrence. 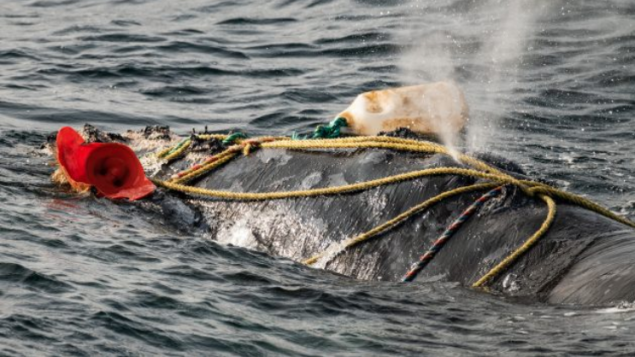 One of the biggest threats to right whales like this one in Canada’s Gulf of st. Lawrence is getting tangled in fishing gear. (Nick Hawkins)

Researchers and the public propose names

The New England Aquarium in the U.S. has a photo identification database in the North Atlantic Right Whale Catalog that it manages. Researchers there organize sightings of individual whales and assign them four-digit numbers. But once a year, they nominate whales with distinct features or a strong story to receive names. They and members of the public are invited to propose names which are voted on by people who study the whales in their environment.

“By giving these whales names based on their marking, we are able to recognize them in real-time from a boat or a plane,”said Philip Hamilton, research scientist at the New England Aquarium who manages the Catalog. “We see the distinctive heart-shape scar and immediately know it is Aphrodite, #1701, named after the goddess of love.”

As other examples, a 15-year-old female whale was named Snow Cone for the natural marking on her head in the shape of the summertime treat of that name. Fenway was named for the famous baseball park in Boston, U.S. because the long mark on her head resembles a baseball bat.  Her bio reads, “The Boston Red Sox are my favorite team and they play at Fenway Park!” 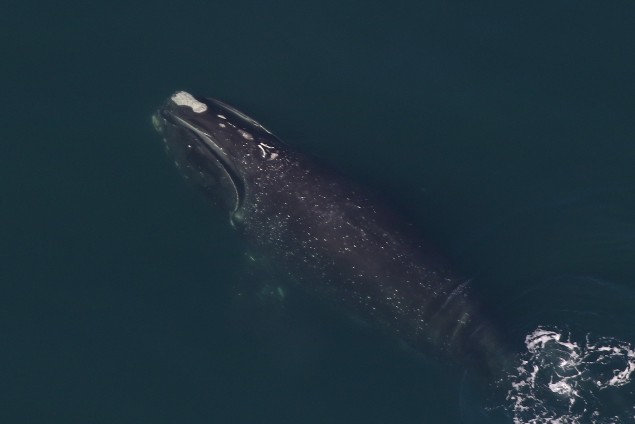 This right whale has little dots on its head that remind one of starts and was named Galileo in honour of the famous Italian astronomer. (Center for Coastal Studies, NOAA Research Permit #19315-01)

Canadian government acts on many fronts

For the past several years more right whales have come into the Gulf of St. Lawrence, perhaps because their source of food is moving. The Canadian government has taken action to try to protect them from entanglements with fishing gear and vessel collisions which can maim or kill them. There have been fish fishing area closures and suspensions. Ships have been obliged to reduce their speeds or avoid areas where the whales are found. There has also been more surveillance by aircraft and drone.