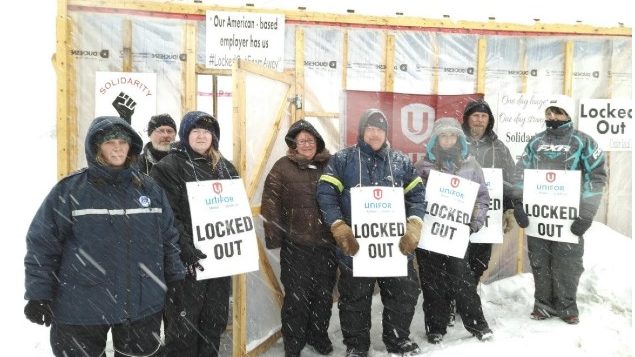 Workers at D-J Composites in Gander, Newfoundland were locked out in December of 2016. The use of scabs is said to have prolonged the dispute which lasted 22 months. (Unifor/CNW Group)

An opposition member of Canada’s Parliament has tabled a piece of legislation that would stop employers in federally regulated sectors from hiring non-union workers called scabs during legal strikes or lockouts.

In Canada, some sectors such as transportation, banks and radio and television broadcasting are governed by the Canada Labour Code. Others are regulated by the labour codes of individual provinces or territories and they vary. The provinces of British Columbia and Quebec already have laws banning the use of scabs during labour disputes.

At the federal level, opposition politician Scott Duvall of the New Democratic Party has tabled a private members’ bill to do the same. Canada’s largest union in the private sector, Unifor, is urging all members of Parliament to pass the legislation, as does the Canadian Union of Public Employees.

Unifor argues that using scab labour “only serves to prolong labour disputes, undermines the right of unionized workers to take strike action and removes any incentive for employers to negotiate fairly to end any strike or lockout.” 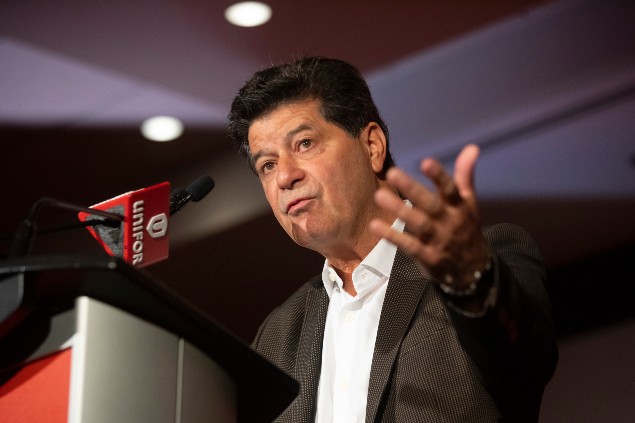 “Ending the use of scabs in federally regulated workplaces will go a long way to balancing the scales that are unfairly tipped in the employer’s favour,” said Union President Jerry Dias. (Chris Young/The Canadian Press/file)

It notes that in 2015, the Supreme Court of Canada ruled that the right to strike was a fundamental right protected by the Canadian Constitution.  Unifor holds “that right is lost when an employer can hire replacement workers to steal another workers(sic) job.”

The current Liberal government is in a minority position in the House of Commons. The opposition Conservative Leader Erin O’Toole has recently made statements championing the rights of workers and their unions, a move that is unusual for the normally pro-business party. He appears to be trying to stake out a new constituency and eventually steal support from voters who normally would support the New Democratic Party.

Scales said to be ‘unfairly tipped in employers’ favour’

“Any federal politician who claims to stand up for working people and their families, needs to back this private member’s bill,” said Unifor National President Jerry Dias. “Ending the use of scabs in federally regulated workplaces will go a long way to balancing the scales that are unfairly tipped in the employer’s favour.”

Unifor is also calling on all provincial governments to pass laws to ban the use of scabs during strikes and lockouts.