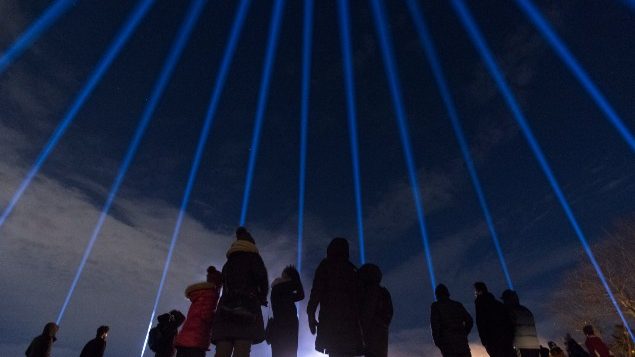 Beams of light were projected into the night sky in Montreal on December 6, 2020 in memory of fourteen women who were shot to death at a Montreal engineering school in 1989. (Graham Huges/The Canadian Press)

December 6, 2020 was the 31st anniversary of the massacre of 14 women at the Ecole Polytechnique, a Montreal engineering school. As happens every year, people gathered in Montreal to remember those who died and to condemn violence against women. However, because of the pandemic fewer people attended the ceremony and more watched it online.

On that day in 1989, a lone gunman went to a classroom and ordered men and women to separate sides of the room, stated he was “fighting feminism” and opened fire on the women. He moved on to other parts of the school shooting more people and he eventually took his own life. Ten more women and four men had been injured.

December 6 has been declared a National Day of Remembrance and Action on Violence Against Women in Canada.This year, the Mental Health Commission of Canada noted an increase in gender-based violence that has occurred during the COVID-19 pandemic and the fact that many victims have had to spend more time at home with their abusers. It also noted a reduction in the social services that offer help to them. 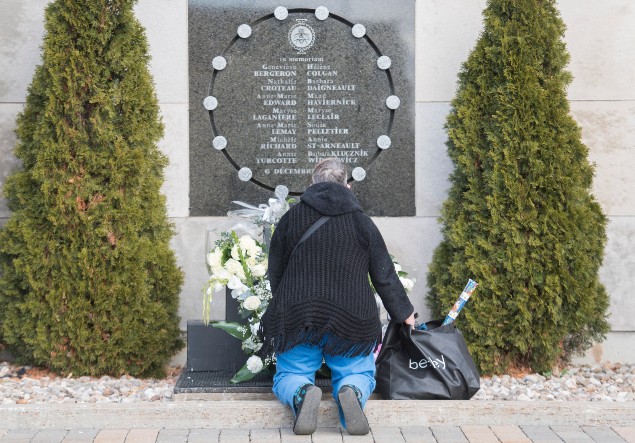 On Dec. 6, 2020, a woman kneels in front of the commemorative plaque which names the 14 women murdered at Polytechnique in Montreal. (Graham Hughes/The Canadian Press)

‘Gender-based violence has no place’

The current government of Canada places much emphasis and funding on fighting violence against women in Canada and the world. Every year, it promotes 16 Days of Activism against Gender-Based Violence from November 25 which is the International Day for the Elimination of Violence against Women to December 10 which is World Human Rights Day.  During that time it urges people to speak out against gender-based violence and to renew their efforts to end it.

“Gender-based violence has no place in our communities or our country, and the Government of Canada is continuing to implement a national action plan to address it,” said Prime Minister Justin Trudeau in a statement on the anniversary of the massacre. “This plan must ensure that survivors, their families, and all those who face gender-based violence have reliable and timely access to protection, support services, and justice…

“The safety of women must be the foundation of any society. Yet still today, too many women, girls, and people of diverse gender identities and expressions face violence and discrimination in Canada and around the world. We still have a lot of work to do to ensure that they can live without injustice, without misogyny, and without fear.”

The people who were murdered on December 6, 1989 were: