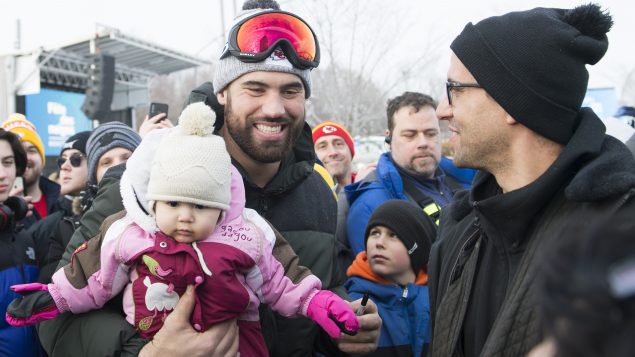 Laurent Duvernay-Tardif holds an infant as he greets fans during an event in Montreal to celebrate his Super Bowl victory earlier this year. Duvernay-Tardif was honoured by North America's premier sports magazine, Sports Illustrated, on Sunday for his work fighting COVID-19. (THE CANADIAN PRESS/Graham Hughes)

Laurent Duvernay-Tardif, a massive man whose physical presence appears more than matched by his commitment to excellence, has been named one of five winners of Sports Illustrated’s prestigious Sportsperson of the Year award.

Duvernay-Tardif, a graduate of McGill University’s medical school, became the fourth Canadian to win or share the honor since it was first awarded to another physician, Roger Bannister, for breaking the four-minute mile barrier in 1954. 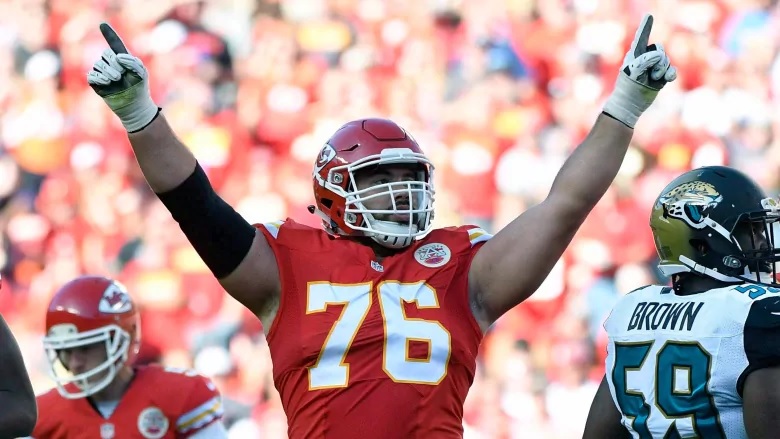 Laurent Duvernay-Tardif, who spent eight years getting his medical degree, announced earlier this year that he was stepping back from football to join the the fight against COVID-19 in his native Quebec and to study public health at Harvard. (The Associated Press/Ed Zurga)

In July, Duvernay-Tardif announced that he was taking a year off from pro football to join in the fight against COVID-19 in his native Quebec, by working–among other things–as an volunteer orderly in a long-term care home as he began studies in public health at Harvard University.

On Sunday Sports Illustrated announced it was honouring Duvernay-Tardif for his work on the medical front lines, as well as NBA star LeBron James, tennis player Naomi Osaka, Women’s National Basketball Association star Breanna Stewart and Duvernay-Tardif’s teammate, Patrick Mahomes, for their courage in speaking out about racial and social justice.

The five were honoured collectively as “the activist athlete.”

I dedicate this award to all the healthcare workers who have been making huge sacrifices in order to protect and care for others.

Duvernay-Tardif is the fourth Canadian to win or share the year-end award–after Bobby Orr in 1970, Wayne Gretzky in 1982, and Bob Bourne, in 1987.

Duvernay-Tardif dedicated the award “to all the healthcare workers who have been making huge sacrifices in order to protect and care for others.”

In November, his medical scrubs were put on display at the Pro Football Hall of Fame, in Canton, Ohio.