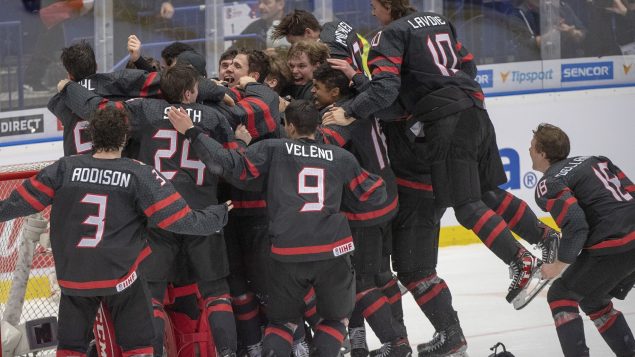 Canada's players celebrate after defeating Russia 4-3 in the gold medal game at the World Junior Hockey Championships on January 5, in Ostrava, Czech Republic. The victory won them The Canadian Press team of the year award. (THE CANADIAN PRESS/Ryan Remiorz)

Canada’s world junior hockey team, winners of the world junior championship in the Czech Republic last January, are the 2020 Canadian Press team of the year-thanks to a heart-stopping comeback in last January’s gold medal game.

Down 3-1 to Russia with 11 minutes–they staged a furious comeback to wipe out the lead to win the title.

Canada has now 29 medals, including 18 golds, since 1974 when the International Ice Hockey Federation officially sanctioned the competition.

Prior to this year’s victory, Canada last won the title in 2018 when the tournament was held in the United States.

It is the sixth time Canada’s world junior team has earned CP team of the year honours, and the first since it scored back-to-back wins in 2008 and 2009.

In a year that saw the sporting world turned on its head by the COVID-19 pandemic, the juniors won just over 38 per cent of the vote by writers, broadcasters and sports editors across the country. 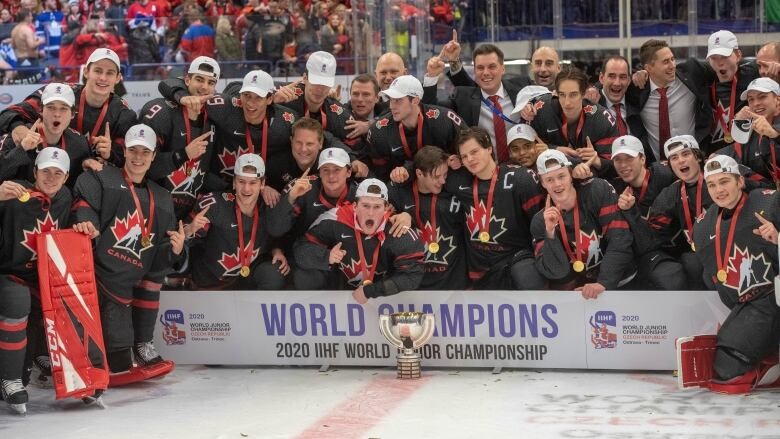 Canada has won 29 medals, including 16 golds, since 1974 when the International Ice Hockey Federation officially sanctioned the competition. (THE CANADIAN PRESS/Ryan Remiorz)

The voters awarded Canada’s Olympic and Paralympic teams second place–with 14 votes for their call to postpone the Tokyo Olympics and–citing the safety of the athletes and the general public–to not attend the Games during the widening COVID-19 pandemic.

The Toronto Raptors placed third with 13 votes after finishing the 2020 season with the National Basketball Association’s second-best regular season record.

The Raptors won the 2019 Canadian Press vote after winning the NBA title.

Earlier this week, soccer stars Christine Sinclair and Alphonso Davies were named CP’s 2020 female and male athletes of the year.

With files from The Canadian Press, CBC News, RCI,