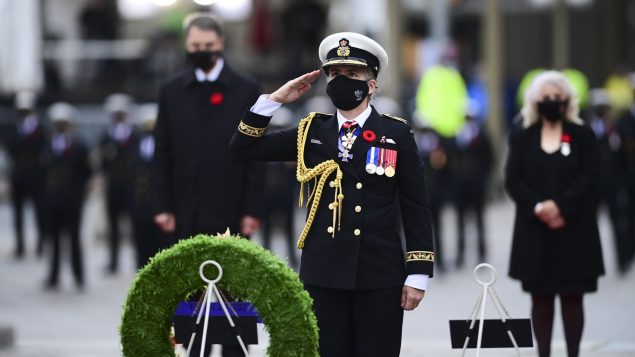 Gov. Gen. Julie Payette places a wreath as she takes part in the Remembrance Day ceremony at the National War Memorial in Ottawa on Nov. 11. In her annual New Year's message, Payette praised Canadians for their reslience in the face of COVID-19 and paid tribute to essential workers, front-line health workers and the military for their efforts through the year. (THE CANADIAN PRESS/Sean Kilpatrick)

Gov. Gen. Julie Payette has delivered her annual end-of-the-year/New Year’s message–praising Canadians for responding positively to the COVID-19 pandemic and paying tribute to front-line and essential workers, including medical professionals and the military.

And she wasn’t alone.

This year’s message included recorded statements from lieutenant-governors and territorial commissioners from across Canada.

Payette noted that Canadians are not “out of the woods yet,” and urged Canadians to remain vigilant and to “look out for one another.”

“Thanks to science and the arrival of vaccines, there is now a light shining at the end of the tunnel,” she said.

“Have a thought for those who are isolated, lend a virtual hand when and where you can.

“And keep a light on, at home and in your heart, as we wait for better days to return.”

Payette’s message follows a public opinion survey released last week that suggests that a majority of Canadians are feeling optimistic about the coming year.

The survey, commissioned by the Association for Canadian Studies and conducted by Leger, found that 70 per cent of those polled said they were”somewhat optimistic” about 2021, while 15 per cent reported feeling “very optimistic.”

The poll was conducted between Dec. 11 and 13–just after Health Canada approved the use of the COVID-19 vaccine from Pfizer and BioNTech— setting the stage for what Prime Minister Justin Trudeau said would be the largest mass vaccination campaign in Canada’s history, a campaign that began the following week.

But her address also came as the two provinces hit hardest by COVID-19 continue to be bludgeoned by the virus.