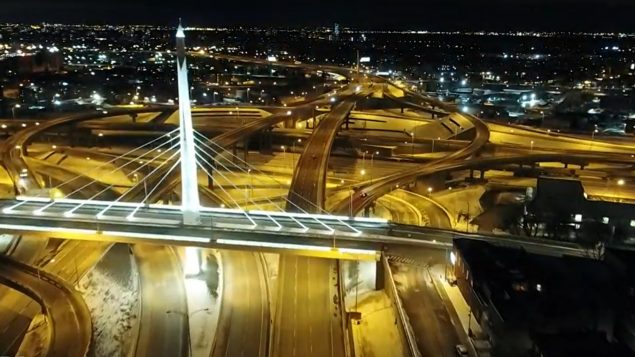 On January 8, Canada’s second most populous province, and one of the two hardest hit by the SARS-CoV2 virus, instituted a month-long nighttime curfew. The measure by the province of Quebec will be reviewed and either ended or renewed on February 8.

The curfew from 8 p.m. to 5 a.m. was enacted in an effort to stop or at least slow the spread of the virus by further limiting social interactions. 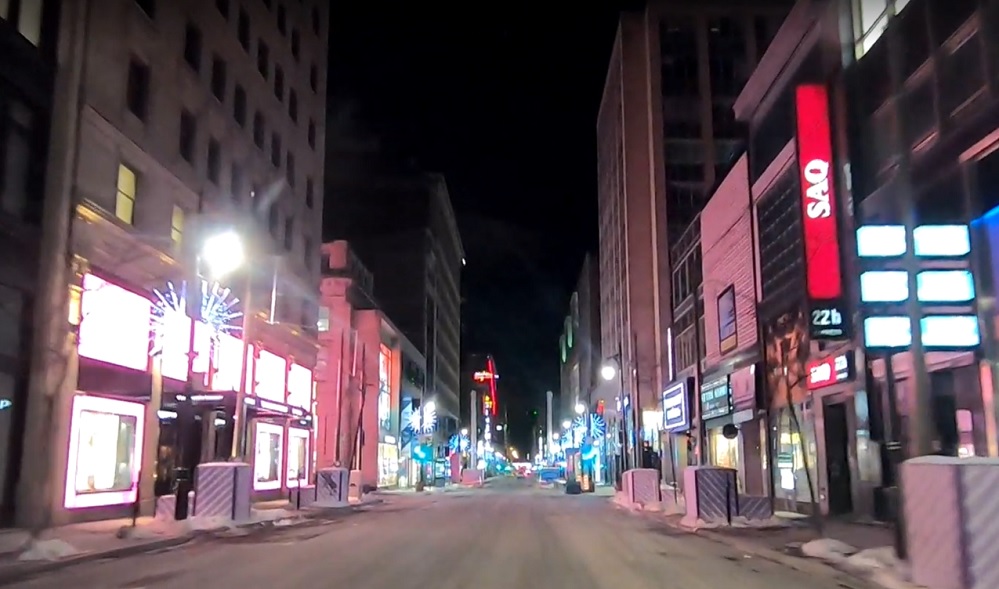 Empty Montreal streets. With police patrolling, compliance with the curfew has been fairly high. Most Quebeckers surveyed agree with the measure. (CBC News)

A new survey by the Leger360 agency and the Association for Canadian Studies showed a very high degree of approval for this measure, but somewhat less support for such curfews elsewhere in Canada, although still a majority of respondents

In all cases those aged 55 and up were most in favour. 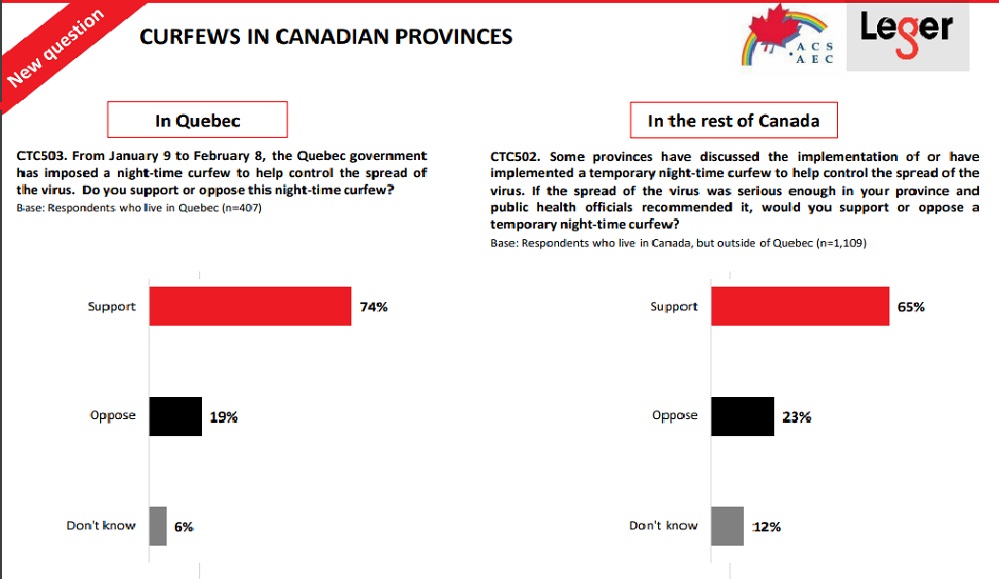 Of note is that while a majority would support such curfews, in Quebec, most think it is a useful measure to combat the virus spreading, while in the rest of Canada even though support was also high, far fewer thought it would be an effective measure. 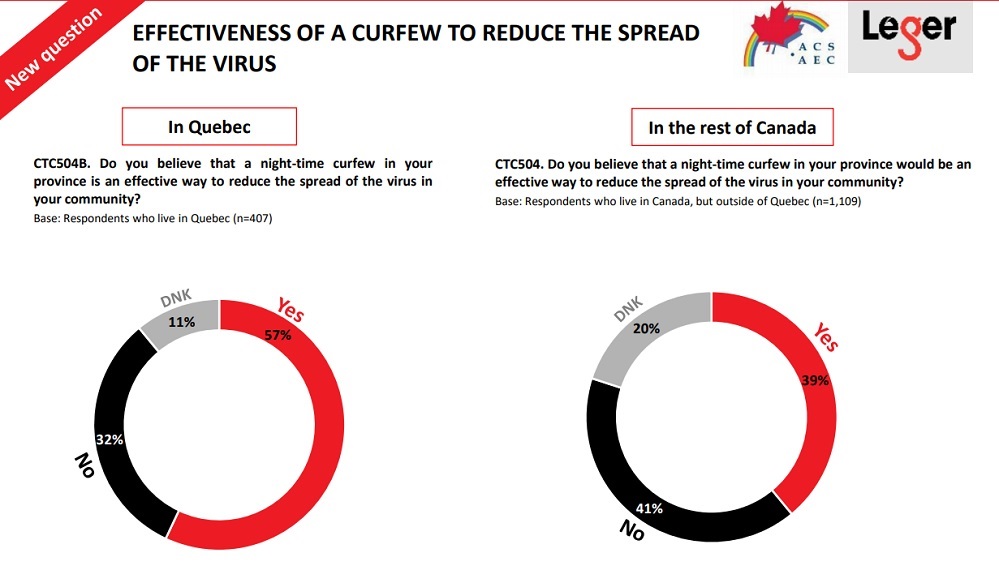 The province is experiencing a steep rise in COVID-19 infections, with a subsequent rise in hospital cases which threatens to overwhelm not only the health care system itself, but the medical staff as well, many of whom are facing exhaustion and burn out after almost a year of COVID tensions.

In terms of  the stress levels and mental health of the population, there has been slow and gradual decline in the percentage of those saying they’re doing ok. In mid-November, the number was 36 per cent, in mid-December 34 per cent, and this recent poll shows on 32 per cent indicating their emotional health is good or very good.            That’s the lowest number since COVID polling began in April of last year. It is also much lower than the U.S. figure which showed 47 per cent of respondents feeling good or very good about their mental health.

As for a vaccine, the percentage of Canadians who will want to get vaccinated remains unchanged from the beginning of the month at 71 per cent of respondents, but up somewhat from mid-December when the figure was 66 per cent.

Fear of contracting the virus remains fairly high and little changed at 59 per cent. It has been hovering above and below this figure since September. 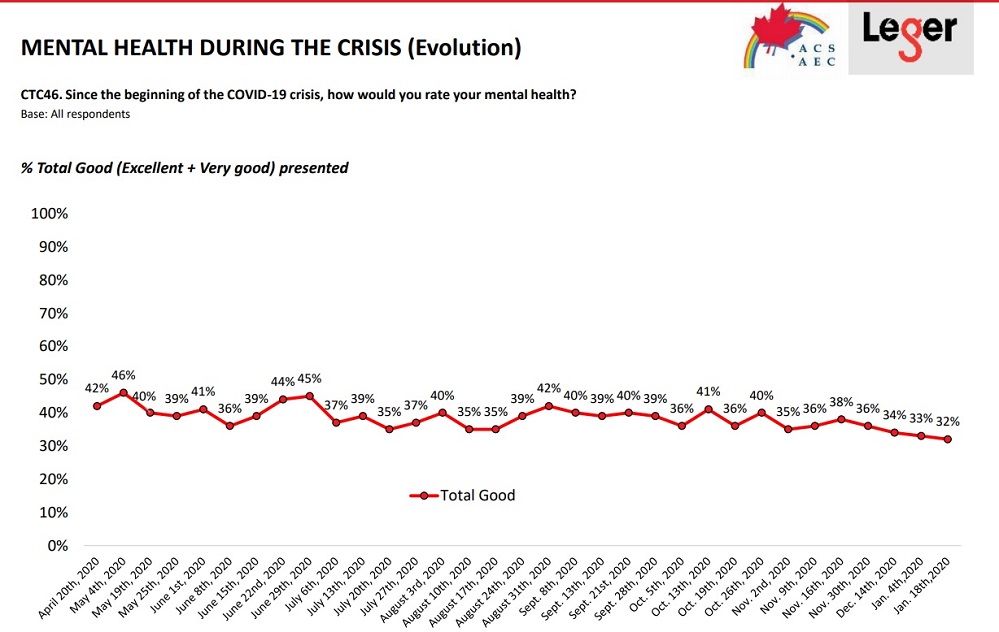 Other provinces have been flirting with the idea of curfews to limit the spread of COVID, but so far have not done so.