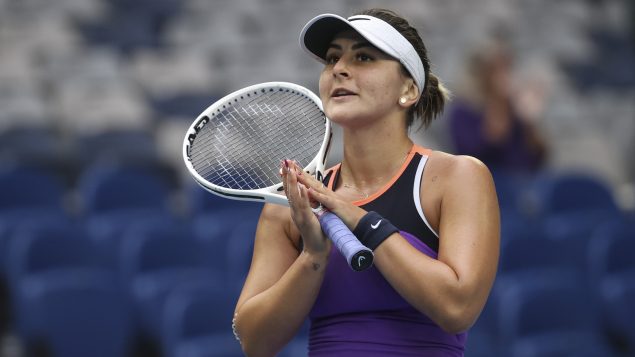 Bianca Andreescu reacts after defeating Romania's Mihaela Buzarnescu during their first round match at the Australian Open tennis championship in Melbourne, on Monday, Feb. 8. It proved to be Andreescu's only victory at the tournament, the year's first grand slam. (AP Photo/Hamish Blair)

Bianca Andreescu’s comeback is put on pause in Australia

Bianca Andreescu’s comeback is on hold.

The aspiring tennis star’s agent on Sunday announced Andreescu’s withdrawal from tournaments in Doha and Dubai and confirmed her withdrawal from an upcoming tournament in Adelaide, Australia–all because of a leg injury.

It was the latest twist of the emotional knife for in Andreescu, who captured Canada’s collective fancy two summers ago when she beat Serena Williams in back-to-back finals–at the Rogers Cup in Toronto and the U.S. Open in New York.

She was then suitably honoured, winning the Lou Marsh Trophy as Canada’s top athlete–male or female–for 2019.

But going unnoticed by many amidst the year-end hoopla was the injury Andreescu, who is now 20 and ranked No. 9 in the world, suffered at the WTA finals in China that October–a torn meniscus in her left knee. 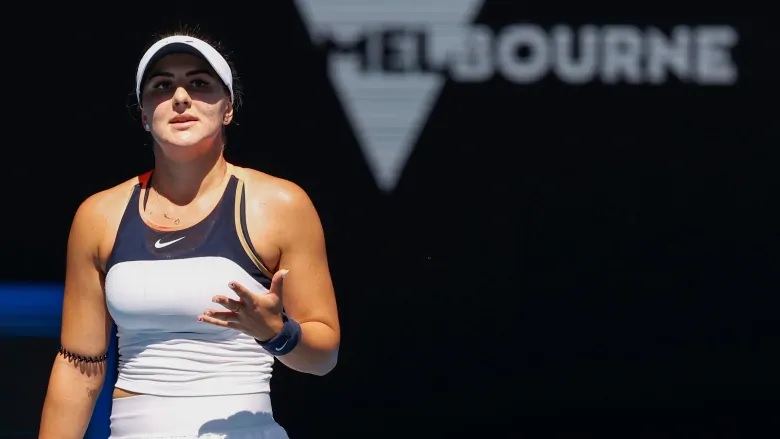 Andreescu reacts during her second-round loss against Taiwan’s Hsieh Su-Wei at the Australian Open on Wednesday, Jan. 10. (The Associated Press/Rick Rycroft)

The injury was severe enough that Andreescu sat out all of last year, as she focused on rehabilitation and training.

In January, she was ready to set forth on the path that many, many athletes–sooner or later–are forced to walk.

And what most of those athletes find–much to their chagrin–is that it’s pretty rocky.

Andreescu, it turns out, is no exception.

In January, she headed to Australia to launch her comeback–nearly 500 days after she had last competed in earnest.

“I mean today’s match wasn’t easy at all and I’m super, super happy with how I fought it out, especially towards the end.” 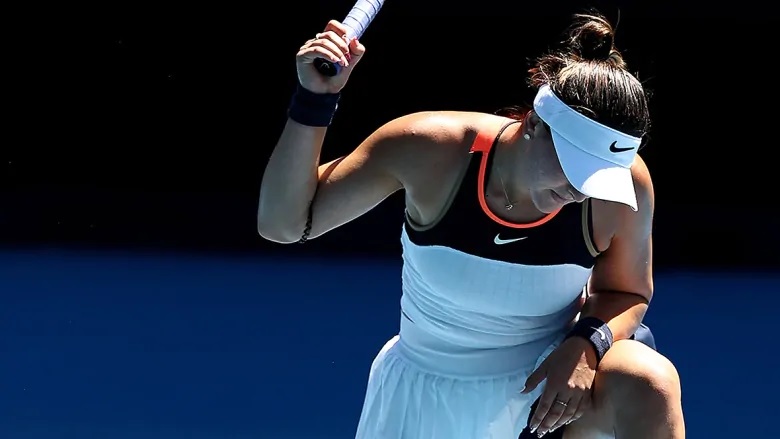 Andreescu will sit out tournaments in South Australia, Doha and Dubai with a leg injury but is expected to compete at the Miami Open, beginning March 23. (Getty Images/Darrian Traynor)

“Even in those tough moments, I thought I could break her a little bit,” Andreescu said afterwards. “But she was on every single ball.”

Things then took a turn for the better after her ouster from the Open.

Andreescu made a nice run at the Phillip Island Trophy tournament in Melbourne, before losing in three sets, 6-7 (9), 6-2, 7-5, to Marie Bouzkova of the Czech Republic, world No. 48, in the semifinals.

Two days later, her team delivered the news to Adelaide: Andreescu would not be coming to play.

“After coming back from 15 months [off] and playing long, tough matches, I’m dealing with a lower body issue,” Andreescu said in a statement from the Adelaide organizers.

“I want to think about the rest of the season so I’m pulling out of Adelaide.”

On Sunday, her agent delivered the same news to Doha and Dubai.

The Andreescu Team is now pointing to Miami for a WTA 1000-level event that begins March 23.