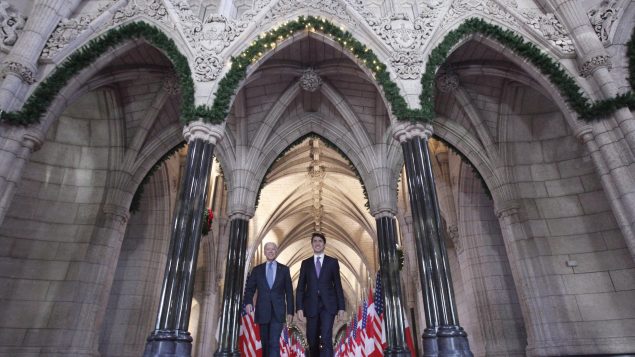 Tomorrow's meeting will be a far cry from the pomp and circumstance Prime Minister Justin Trudeau and US Vice-President Joe Biden shared on Dec. 9, 2016. (THE CANADIAN PRESS/Patrick Doyle)

The list is long of U.S. presidents who made it a point to make Canada the destination of their first official foreign visit.

(Donald Trump, not surprisingly, passed on the semi-tradition, opting to make stops in Saudi Arabia, Israel and the Vatican on his fist foreign foray as president.)

Tomorrow, Trump’s successor, Joe Biden, will hold his first official meeting with a foreign head of government: a virtual one with Prime Minister Justin Trudeau. 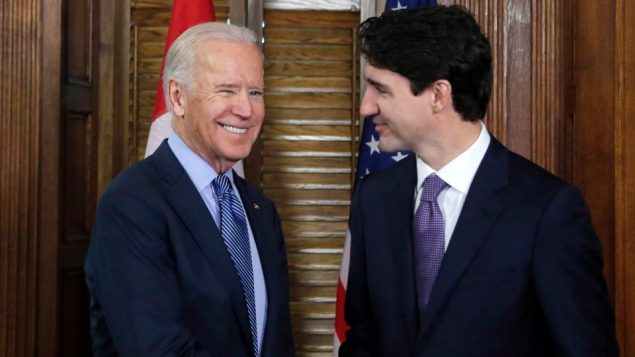 Prime Minister Justin Trudeau shakes hands with US Vice-President Joe Biden on Parliament Hill in Ottawa on Friday, December 9, 2016. The two are set to meet–virtually–tomorrow of discuss a wide range of issues. (THE CANADIAN PRESS/Patrick Doyle)

Both the White House and the prime minister’s office said the two leaders plan to discuss the close economic ties between their countries–ties that are being strained by strict Buy American provisions introduced by the president..

The cancellation of the Keystone XL pipeline project on Biden’s first day in office has also been a recent sticking point in Canada-U.S. relations, though it is not expected to draw great focus on Tuesday. 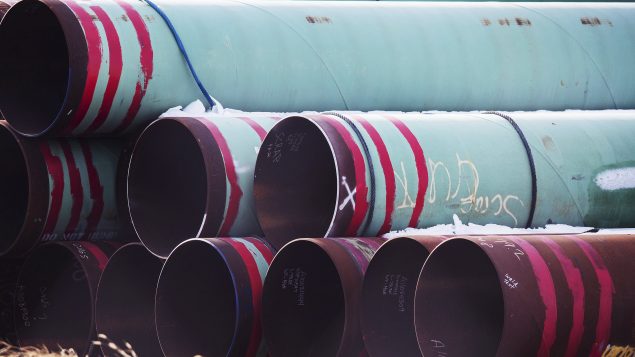 In this Dec. 18, 2020 photo, pipes that were slated to be used for the Keystone XL pipeline are pictured in a field near Dorchester, Neb. Biden revoked the permit for the pipeline on his first day in office. (Chris Machian /Omaha World-Herald via AP)

The CBC’s Alexander Panetta reports that–according to a source who spoke confidentially to CBC News–the detention of Canadians Michael Kovrig and Michael Spavor in China is also expected to be raised by Trudeau.

Kovrig and Spavor were detained in China on Dec. 10, 2018–nine days after Meng Wanzhou, the chief financial officer of Huawei Technologies, was arrested by Canadian officials at the request of the United States while she was changing planes in Vancouver.

“There is serious engagement, there are serious conversations,” Hillman said. 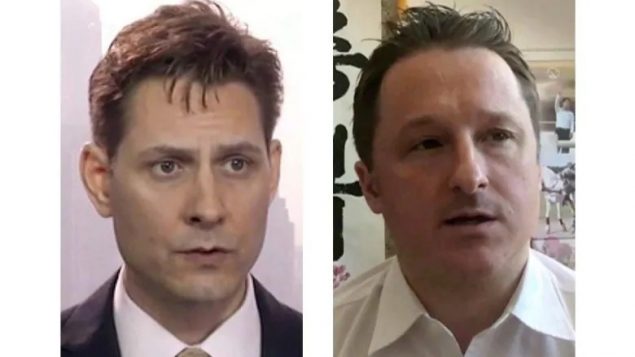 A new administration in Washington has given new momentum to the effort to free Canadians Michael Kovrig, left, and Michael Spavor, shown in these 2018 images from video, from detention in China. (THE CANADIAN PRESS/The Associated Press)

Last Tuesday, Canadian members of Parliament overwhelmingly voted in favour of creating a special committee to focus on the economic relationship between Canada and the U.S.

The Conservative Party motion passed in the House of Commons by a vote of 326 to 3 as the governing Liberals, the Bloc Quebecois and NDP all voted in favour of it.

Members of the Green Party voted against it.

In bringing forth the motion, the Conservatives cited the need for a “serious plan for the economic recovery that recognizes the integration of the North American economy.”