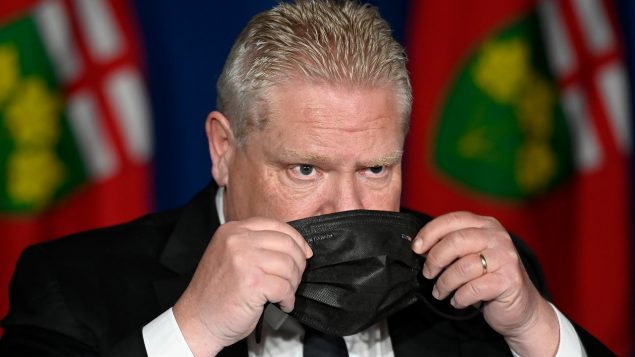 Ontario Premier Doug Ford puts his mask on after speaking at a press conference at Queen's Park, in Toronto, Friday, April 16, 2021. Ontario is extending its stay-at-home order to six weeks, restricting interprovincial travel and limiting outdoor gatherings in an effort to fight a losing battle with COVID-19. (Frank Gunn/THE CANADIAN PRESS)

Ontario premier apologizes for some of enhanced public health measures

Ontario Premier Doug Ford fought back tears on Thursday as he admitted that his government “got it wrong” when it introduced a number of additional COVID-19 restrictions that were not recommended by health experts last week.

Ford’s government faced intense backlash after announcing last Friday that Canada’s most populous province would close playgrounds and allow law enforcement officials to stop anyone in the street for random checks, in a bid to curb the third wave of the pandemic.

The provincial government was forced to reverse both measures amid fierce criticism from public health experts and civil liberties advocates alike, with several police forces publicly announcing their refusal to conduct random checks.

The province was trying to curb mobility in Ontario in response to “extremely troubling modelling,” Ford said.

Driven by a rapid expansion of variants of concern, the pandemic’s third wave has pushed Ontario’s health-care system to a breaking point.

As of Thursday, there were 2,350 people with COVID-19 in hospital. Of those, 806 were in intensive care units and 588 required a ventilator to breathe, both all-time highs for the province, CBC News reported.

Ontario reported another 3,682 confirmed cases of COVID-19 and 40 more deaths linked to the illness on Thursday.

Hospitals throughout the province have been ordered to stop all non-emergency surgeries amid a record number of patient transfers, as health networks try to cope with the influx of COVID-19 patients.

With files from Adam Carter of CBC News