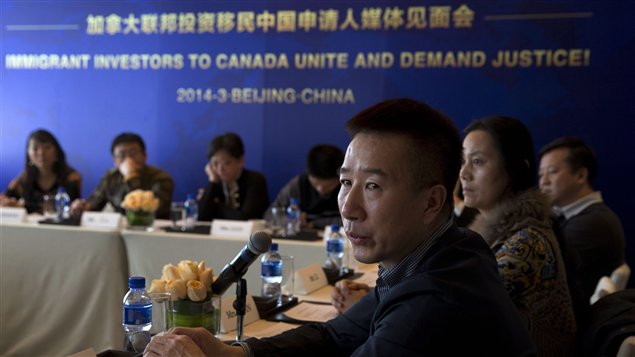 At a press conference in Beijing, Tuesday, March 4, 2014 a group of Chinese millionaires made a plea to the Canadian government to stop its plans to end its backlogged investor immigrant program and eliminate thousands of applications from Chinese nationals.
Photo Credit: Andy Wong/AP

A group of Chinese millionaires upset by a Canadian government decision to stop an immigrant investor program, have called on Canada to reverse its decision in a press conference in Beijing on Tuesday (March 4).

“The applicants have submitted their applications in good faith and submitted their fees. There is a reasonable expectation that this is a business transaction, and that they will be processed,” said Victor Lum, vice-president at Well Trend United Consulting, according to the Globe and Mail newspaper. The Beijing immigration agency helped to co-ordinate those speaking out against Ottawa’s decision.

In a statement, Citizenship and Immigration Minister Chris Alexander defended the government’s overhaul: “We will not waste taxpayers’ dollars on programs that do not meet their objectives, are vulnerable to abuse, or do not promote Canadian interests.”

Remi Lariviere, a spokesman for Citizenship and Immigration, told Global News that there are other pathways to permanent residence, including the federal skilled worker and federal skilled trades programs.

“We understand that IIP applicants affected by these measures will be disappointed,” he said, adding that Ottawa will return the full amount of fees paid by the Chinese immigration hopefuls. “We feel this is the fair and just thing to do.”

Applicants to the Immigrant Investor Program (IPP) had to have a net worth of 1.6 million Canadian dollars and invest $400,000, or $800,000 if they applied after 2010, which would be returned after about five years without interest.