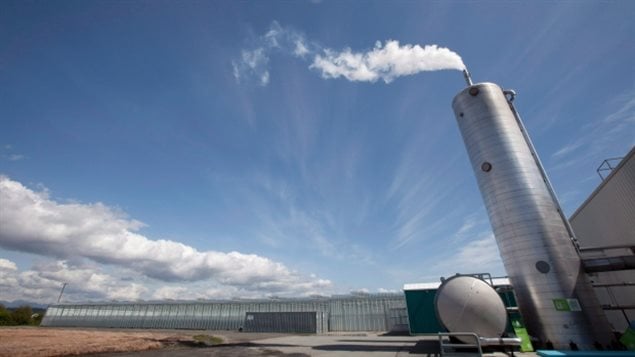 Some greenhouses in western Canada are heated by wood ships that are burned using a system that captures CO2 and feeds it back to plants. A provincial carbon tax encourages companies to find ways to cut to emissions.
Photo Credit: Jonathan Hayward/Canadian Press

Canada must reduce greenhouse gas emissions and the best way to do it is for provinces to set up their own carbon pricing systems, says a report from the Ecofiscal Commission. The commission is made up of economists, former political leaders, academics and business people of all political leanings.

‘Doing nothing…simply not an option’

Canadians are already paying economic costs associated with the climate impacts of greenhouse gas emissions, says the report: “For most Canadians, ‘doing nothing’ in response to climate change is simply not an option.” The problem is what to do. The report says the federal government should not simply limit carbon emissions, but it should let individual provinces set carbon pricing systems that suit their own conditions.

“Each of the provinces is really quite different in terms of their economic structures, their energy mixes, and their emissions profiles,” says Christopher Ragan, a professor at McGill University and chair of the Ecofiscal Commission. “And those differences would naturally need to be built into the carbon pricing policies and you don’t generally get that from federal action.” He notes Canadian provinces already design their own programs and policies in many different sectors and these are quite successful. It is a model he thinks works well for reducing greenhouse gas emissions too.

ListenRagan adds provincial systems are advantageous too because they raise revenues that can be plowed back into provincial government coffers. He notes that the province of Quebec already has a cap and trade system and British Columbia has a carbon tax, and each system works well in its jurisdiction. The province of Alberta is updating its system and Ontario has announced it will introduce one of its own.

There is some urgency to act, says Ragan, noting a changing climate is already associated with an invasion of the pine beetle which has destroyed western forests and a decline in eastern fisheries.