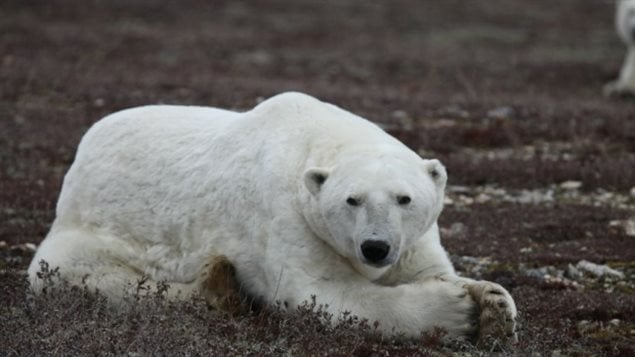 A bear showing loose skin flaps from a summer with little food, waits on the shores of Hudson Bay for the sea to freeze over so it can begun hunting for seal. Longer ice free seasons, mean bears are forced to seek out other less nutritious land-based food with survival rates dropping.
Photo Credit: explore.org

Climate change  which has reduced Arctic sea ice is causing some polar bears to change their diets.

The polar bear diet consists mainly of fat, lipid rich, seals which they hunt on the winter ice. However as the ice is forming later and retreating earlier in recent years, it means the bears are stuck longer on land

A new study by the US Geological Survey (USGS) has found that some of the bears now stuck on the land for longer periods are turning to land-based foods like berries and other plants, caribou, eggs, and birds, but that in the long-term, it won’t sustain them.

Dr Karyn Rode, lead author of the study notes that there is already not a lot of land-based food available to the bears.

When bears raid nesting colonies of ducks, or other birds, they cause severe loss to the colony.

In 2012 Environment Canada scientist Grant Gilchrist, who specializes in Arctic birds said that eider ducks and polar bears have existed for eons, but now he says the bears are being left with no other choice but to raid the nesting colonies.  He said this has become more common around Hudson Strait, Frobisher Bay, and the Belcher Islands in Hudson Bay.

“In some areas over 80 per cent of the colonies are being destroyed by bears and we are very concerned about this “, he said.

A 2014 paper called, “Longer ice-free seasons increase the risk of nest depredation by polar bears for colonial breeding birds in the Canadian Arctic” was published in Proceedings of the Royal Society B. In that study, lead author Samuel Iverson noted that even cliff dwelling species can be targetted by hungry polar bears.

There is a discrepancy however as the USGS survey said they found very low numbers of bears eating eggs.

However the USGS study notes that none of the land-based food could adequately replace in either amount or nutritional value, the meat from seals or other marine food, whether it be caribou, birds (such as geese), duck and goose eggs, or plants.

It noted that few foods are as energy-rich as marine food with their high lipid content. This is ideal for for storing fat and  providing all nutrient needs. Land-based foods are high in protein but low in fat. As for eating plants, “Polar bears are not physiologically suited to digest plants, and it would be difficult for them to ingest the volumes that would be required to support their large body size,” the study said.

“Save the sea-ice or the bears will be gone” S. Armstrup

In addition,  in searching for these limited land-based foods, polar bears may come into competition with their distant cousins, grizzly bears which have been moving further north .

“This paper establishes in no uncertain terms that polar bears are very unlikely to be able to make a living on land, and that if we don’t save the sea ice, polar bears will indeed be gone,” said Steven Amstrup, chief scientist with Polar Bears International, which collaborated on the study

Inuit and eider down business