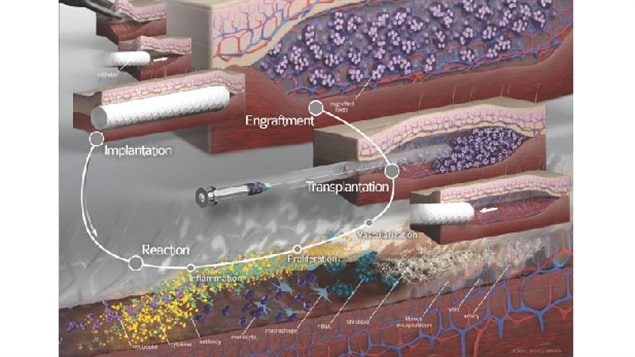 A new process has been developed by a medical research team in Canad which shows great promise in the treatment of diabetes.

Dr.James Shapiro (MD, PhD) led the research team. He is the Canada Research Chair in Transplant Surgery and Regenerative Medicine and Professor of Surgery, Medicine and Surgical Oncology at the University of Alberta.

The new technique is the result of years of research into improving treatment of diabetes and transplanting pancreatic islets.

Islets are the collective of cells which control blood sugar levels in the body , and which are damaged or rendered ineffective through diabetes.

The process itself of successfully transplanting islets was the result of long years of efforts and although still relatively new, has been shown to be effective.

However as Dr Shapiro points out, the donor islets are injected into the liver and only about 10 percent survive to provide benefits to the patient.

This process requires an invasive operation and as the liver is within the body, makes it difficult to check on progress and what is happening deep inside the body.

Dr Shapiro’s team tried something new which was to insert a common medical nylon tube just under the skin. The body detects it as a foreign object and builds a series of blood vessels around it (vascularization) but doesn’t detect it as a “threat”.  After some time the plastic is removed and islets are injected into the spot under the skin.  Because these are foreign cells, anti-rejection drugs must be taken by the patient, however with the new increased blood circulation, a much higher percentage of the islets survive and are also able to release insulin into that same blood stream to act effectively in the body to control blood sugar levels.

An additional and new phase of this research is to use pre-islet stem cells. Once injected under the skin in the same process, they too survive and become islets and provide the insulin and control of blood sugar level.

Another advantage is that the process is much less invasive, and are much easier to monitor progress and rejection and other issues through biopsies and imaging.

This has been tested with both animal and human islets and stem cells.

Dr. Shapiro says the process should also be suitable and  applicable to a number of other medical procedures such as when dealing with haematological disease or other genetic diseases where a small number of cells need to be replaced. He cites the example of or children’s liver disease where a single enyme is missing, and which requires a liver transplant presently, but which could potentially be dealt with much more easily with a similar process as this, where a small number of the missing cells can be inserted under the skin.

Dr. Shapiro says the process shows tremendous potential and they expect clinical trials to begin within a matter of weeks.