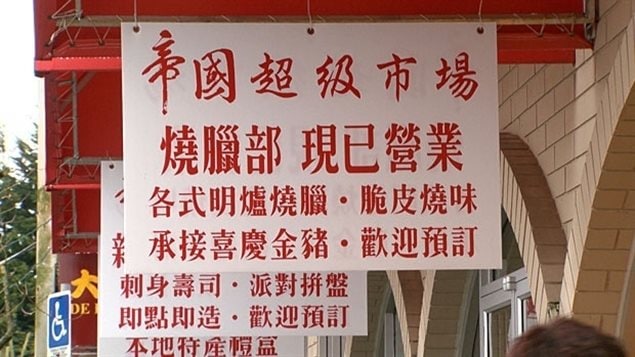 Chinese only signs in Richmond BC have long angered the community's non-Chinese residents.
Photo Credit: CBC

No English or French on Chinese business signs in Vancouver suburb

Canada’s “main” language debate is well-known around the world.  High-profile issues such as a letter by a Parti Quebecois politician who wrote a letter seeking to ban Sir Paul McCartney from performing in Quebec because he would sing in English, or the famous “pasta-gate” where the province’s Office Quebecois de la Langue Francaise (nick-named the language police)  issued a warning letter to a Montreal Italian restaurant for using words like “Pasta”, “antipasti”, “calamari” on the menu, instead of French words.

However, while the use of English on signs and in business and public institutions is restricted in Quebec, that is not the only place where language is an issue.

In the suburban Vancouver city of Richmond, another language issue has been simmering for years. This one however concerns Chinese signs.

Half of the city’s residents speak Cantonese, and many businesses and advertisements are written in Chinese characters only. The other half of residents say they feel like outsiders in their own country.

In 2012, a petition with 1,000 signatures was sent to local city council to demand that signage also feature one of Canada’s two official languages (English or French).

That call was rejected by council.

Quoted in the Toronto Star newspaper in 2013, Richmond City Counciller Evelina Halsey Brandt, herself an immigrant from Eastern Europe made a reference to the Quebec language situation.

“Every business has the right to try and attract the customers of their choice. If they don’t want me to come into their store,” she said, “I will vote with my wallet and my feet. I don’t want to become a language police where you can’t even use the word pasta on the menu,”

However, the councillor who had already said she would not run for re-election,  told the Richmond News in 2014 that she had changed her mind, saying the situation has worsened since then.

She said a sign announcing a development in her neighbourhood was in Chinese only.  She said, “It’s one thing for businesses to advertise only in Chinese, but on development signs that are supposed to inform me of what’s going on in my neighbourhood?”  She added, “The time has come to say that you’re part of Richmond and part of Canada,” –

Now Chinese community leaders in Richmond say they are trying to work with Chinese businesses to volunatarily include English.  They say they want to avoid a bylaw.

The group is calling itself the Signs of Harmony Project. Quoted by the Richmond News, Kenneth Tung, president of a local technology company says, “When you regulate, you penalize. It is not business-friendly. It does not build harmony”.

Another member, Tung Chan was quoted saying, “Having a Chinese-only sign does not show respect to the country you’ve chosen to live in”.  He also told a CBC radio programme this week, “It’s important for the community to be involved. We want to advocate a better solution through communication and education”.

The group says it will speak to the owners of Chinese businesses to try to convince them to voluntarily add English.

The City of Richmond has said that before any bylaw is reconsidered, there would be an effort to educate and communicate with residents the advantages of including English on their signs.

In the greater Toronto area, the ethnic Chinese population in the suburb of Richmond Hill is around 23 percent compared with the 47 percent of Richmond BC. However the Ontario town, faced with similar concerns, had already enacted a by-law in 2009 in which it stated that signs must have at least 50 percent English or French text.