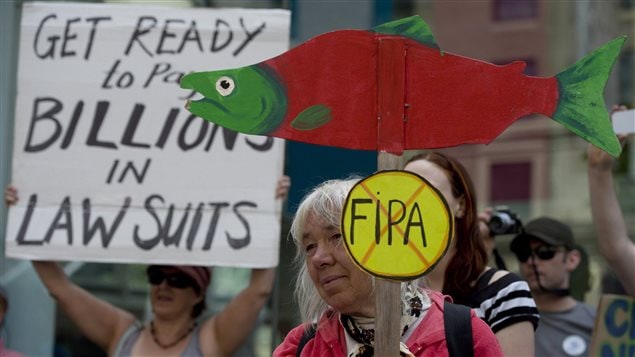 The Hupacasath First Nation challenged the Canada-China Foreign Investment Promotions and Protection Agreement (FIPA) in federal court. This is the scene of a protest outside the federal court where a hearing was held in down town Vancouver, B.C. June 5, 2013. It was ratified in September 2014.
Photo Credit: CP / Jonathan Hayward

Sold Down the Yangtze: the story of Canada’s FIPA with China

Sold Down the Yangtze: Canada’s Lopsided Investment Deal with China, a new book by Gus Van Harten, could be described as a labour of love and duty. Van Harten is an investment law specialist who teaches at Osgoode Hall Law School at York University in Toronto.

He says he wrote the book to inform Canadians, the general public, who allow him as an academic, to have the luxury of developing his own expertise. It’s that expertise that informs Van Harten’s review of the Canada-China Foreign Investment Promotions and Protection Agreement (FIPA).

“One of the reasons I wrote the book was just to put on the record for posterity the story of those who I think promoted the treaty irresponsibly without there being proper public review and public debate and now have helped the federal government lock us in long-term.”

The deal, ratified by Stephen Harper’s government, in September 2014, gives a general right of market access to Chinese investors in Canada, but it is not reciprocal.  Canada does not have the same access to China.Van Harten says, “I’ve never seen that before in an investment deal. It’s quite shocking. It essentially means Chinese investors have a general right to buy assets in Canada but the federal government did not get the same right for Canadian investors in China.”

Moreover, the deal will cost Canadians in the event of objections to company practice or policy, that may hinder the ability of Chinese investors to make money here. It renders our democracy impotent, as disputes will not be settled by Canadian institutions such as our government or our courts,  Instead, investor arbitration panels, consisting of three people, in secret consultation will render decisions and fines. According to Van Harten, “If future governments decide to, for example, get tougher on environmental assessments again or make changes to respond to climate change that that’s going to end up costing Canadian taxpayers potentially a whole lot more money and protecting the Chinese investors and the value of their assets and the profits that they plan to earn.”

Van Harten did not the want the story to be one of only gloom and doom. He included chapters on what can be done: “We can insist that governments pass legislation to ensure that the ways in which this treaty is used, including to pressure out governments potentially behind the scenes, that that’s all tracked and made public so that Canadians can evaluate properly how governments are responding to the treaty in the decades to come.

And in an effort at greater transparency, Van Harten says, “I think there should be much stricter limits placed on the ability of the federal cabinet to lock us in lock-term in the way this treaty, as I mentioned, is designed to not be able to be changed for a long period of time without China’s consent.”

The release of the book is rather timely, as the federal election is expected to take place October 19th, 2015. If more Canadians become informed of the imbalance inherent in this deal, there may more interesting debates and campaigning. If not, we will have to wait until a dispute occurs, and watch the outcome.