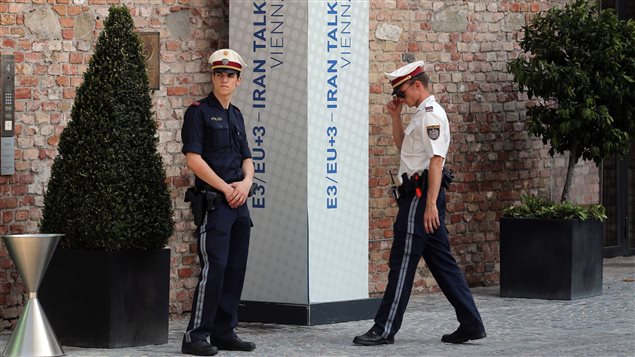 Police officers wait in front of the Palais Coburg where closed-door nuclear talks with Iran took place in Vienna, Austria, today. The talks went over their second deadline in a week, raising questions about whether world powers can cut off all pathways to an Iranian bomb through diplomacy — and testing the resolve of U.S. negotiators to walk away from negotiations.
Photo Credit: AP / Ronald Zak

Iranian-Canadians weigh-in on talks in Vienna

Iranian Canadians, like many people around the world, are watching the talks in Vienna with keen interest.  But opinions on the outcome are somewhat divided.

Nuclear talks between Iran and six major powers will continue beyond today’s deadline, as the two sides wrangle over a handful of the most challenging issues.

Arsalan Kahnemuyipour is president of the Iranian Canadian Congress.  In response to a request for an interview on the Iranian-Canadian view of the talks, he, and his colleagues, sent out a questionnaire, to get a sense of the range of opinions.

The Iranian Canadian Congress is a non-profit, non-partisan and non-religious organization, established in 2007, to represent the interests of Iranian-Canadians. It recently renewed its mission and expanded its membership in Canada, with the majority residing in the Greater Toronto Area.

Kahnemuyipour, and fellow members are adamant about not assuming to speak for all Iranian-Canadians, so the sample of 200 returned questionnaires provides a snapshot of the general feeling.

Most Iranian Canadians have no problem returning to Iran to visit, and there are few problems with communication, but the concern over human rights abuses and the quality of life for many people living in Iran, is still an overwhelming issue. Meanwhile, Iranians in a position to do so, with the right resources, continue to immigrate to Canada, one of the preferred destinations in the world.

The response to the Congress questionnaire revealed that here in Canada now, a strong majority is in favour of a nuclear agreement with the current Iranian government, as they feel it is the best opportunity to avoid a devastating war.  Also, a negotiated agreement will lift the sanctions on Iran which will improve the economic well-being of the Iranian people.

Slightly fewer respondents believe an agreement will improve the lot of people in Iran, as Kahnemuyipour explains, those with family and, or, financial ties to Iran will perceive any change, such as the lifting of sanctions, as an improvement.  Those who don’t support a negotiated deal, however, view it as an act that will only strengthen the current regime, and any economic benefit will be limited only to the people within the inner circles of Iran.

Responses were split almost evenly when asked about human rights violations. Kahnemuyipour cautions that responding, no,  the situation won’t improve, does not necessarily mean it will deteriorate.  However, some people believe, without the sanctions, the pressure and scrutiny will be off Iran and it may do as it pleases with even less consideration of people’s human rights, and therefore the situation could deteriorate drastically.  He says people have cited the flagrant human rights abuses in the wake of the American hostage crisis and later, the execution of thousands of Iranians in the aftermath of the Iran-Iraq war as examples of what has happened when the pressure was lifted.

As for the almost half of Iranian-Canadians who view a negotiated nuclear deal as a force for good in Iran, they argue that the economic benefits will lead to a strengthening of the middle-class in Iran which is the back bone of any progressive change and they foresee an evolution toward democratic developments and human rights improvements.

Some say the Rouhani government has been preoccupied with the nuclear question, and in having it resolved, energy and attention can be directed to other challenges. But there are those who feel the nuclear problem has been an excuse not to deal with human rights violations.

Like the talks at the Palais Coburg, in Vienna, Austria, it remains to be seen what the eventual outcome will be, but the Iranian-Canadian community, for the most part, is watching with avid interest.