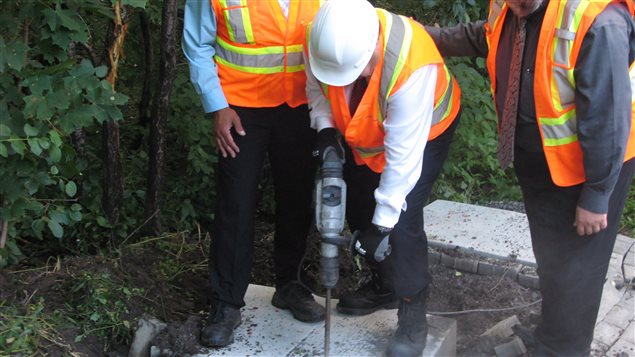 Montreal Mayor Denis Coderre uses a jackhammer to destroy a concrete foundation laid by Canada Post for a grouping of mailboxes. At issue is its decision to soon deliver mail to such community boxes and to stop home delivery.
Photo Credit: Peter Ray/Canadian Press

Montreal’s colourful mayor, Denis Coderre used a jackhammer to illustrate his opposition to Canada Post’s decision to stop delivering mail to individual homes. The crown corporation wants to save $500 million annually by instead, installing groups of mailboxes in communities across the country and having people pick up their own mail there. This has caused much controversy.

Canada Post had installed a concrete base for one such community mailbox installation at the entrance to a Montreal nature park without first consulting local officials. Coderre made a show of donning a hard-hat and boots and using a jackhammer to start digging up the base.

“The message we’re sending today is that Canada Post will respect us,” said Coderre. “It’s a nature park and we’re working hard to protect nature.” He went on to call the corporation’s actions “savage and arrogant” and said he would bill Canada Post for the work to remove the concrete footing.

Coderre is demanding that the leaders of all the parties running in the current federal election campaign state where they stand on the future of Canada Post and its decision to stop delivering mail to homes.