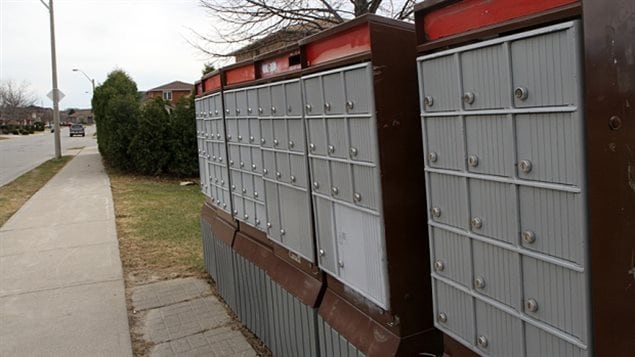 The City of Hamilton, which imposed a $200 charge for each new superbox, will meet with Canada Post in court the week of May 25 as the Crown corporation tries to fight a bylaw aimed at restricting the installation of community mailboxes.
Photo Credit: amantha Craggs/CBC

The resistance to Canada Post’s plans to end all home delivery of mail continues to be challenged as more groups join the protest..

In addition to individual protests, and the city of Hamilton Ontario’s protest action, now four city mayors in and around Montreal are joining the protest.

The mayors of Montreal, Westmount, Longueuil (on the south shore) and Laval (north shore)  have said they’ll join the postal union lawsuit against Canada Post’s plans.

The Canadian Union of Postal Workers represents 54,000 postal employees across the country and alleges in their legal case that the move to replace home delivery with community “superboxes” is unconstitional.

“I’m a little tired of hearing that we have to get with the program and that social media has made mail service extinct.” Mayor Peter Trent,

The mayors say they first want to be ensured they can join the CUPW lawsuit. They also say Canada Post is putting up boxes on private property in some cases, while in others some locations are unsafe, difficult for seniors to access, or cause traffic problems.

The mayor of Westmount, Peter Trent  told reporters, “Canada Post reduced services and increased stamp prices even before email was invented. I’m a little tired of hearing that we have to get with the program and that social media has made mail service extinct.”

In the Greater Toronto area (GTA) , a city councillor in Aurora has tabled a motion for a by-law similar to that of Hamilton to charge Canada Post a fee to research mailbox locations.

Between 2008 and 2013, there were some 4,800 complaints from 130 communities filed against Canada Post, according to documents obtained by CBC News. This includes a number of boxes being vandalized and broken into with concerns about stolen mail, and identity theft.

Today the  New Democratic Party of Canada announced that if elected, they will restore home mail delivery to those whose service has been cut.  The announcement was made in the house by MP Robert Chisholm.

In response,   CUPW National President, Mike Palecek  “It can no longer be denied that this is an election issue. The people of this country deserve a chance to vote on such a major change. It is time for Canada Post management to listen to the overwhelming chorus from the owners of Canada Post – the citizens of this country.  It is time for them to scrap this ridiculous plan.”