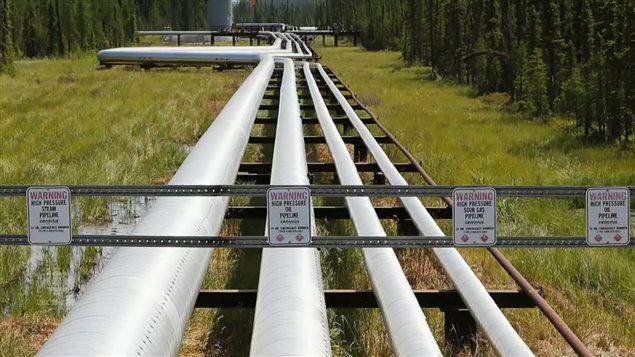 Caption: The Energy East pipeline project would involve reversing the flow of already-existing pipelines and building some new ones to bring bitumen from western Canada to a port in the east.
Photo Credit: CBC

TransCanada Corp. says its Energy East pipeline project will not be an issue for whales in eastern Canada’s Bay of Fundy and that it will have emergency plans in place in the event of an oil spill.

The Conservation Council of New Brunswick released a report yesterday saying the pipeline would lead to increased ship traffic creating noise stress for the endangered North American right whale and increasing the risk of ship strikes.

It also warned that in the event of a spill, the shipped bitumen was likely to form balls that would sink to the bottom and be harmful to the scallop and lobster fisheries of the eastern province of New Brunswick. It also noted that high tides, strong current and thick fog would make, and in the past, have made it difficult or impossible to track or clean up oil spills.

TransCanada spokesman Tim Duboyce told the Globe and Mail newspaper that the proposed Energy East terminal and tank farm are not located near the critical habitat of the right whale. He acknowledged the project would bring an extra 115 ship visits to the site annually, but he said the shipping lanes were shifted out of the habitat more than 10 years ago. He added there had not been a reported whale strike since then and that the population of whales had shown signs of growth.

Duboyce said TransCanada was putting in place emergency plans to try to ensure a spill situation “never happens in the first place.” He told the Globe: “Zero incidents is our aim.”

The premier of the province has said the project will get a thorough review by the National Energy Board. The Conservation Council of New Brunswick has doubts about the assessment by that board and has asked that other, independent assessments be conducted.