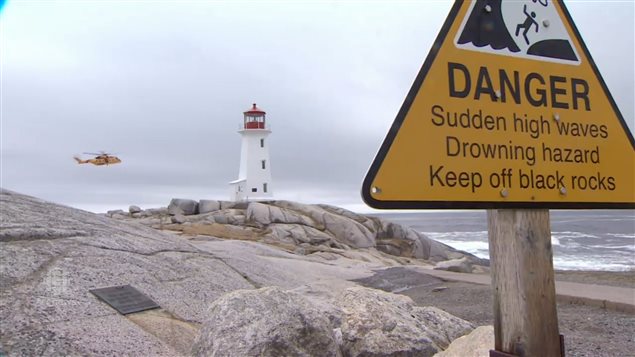 A sign warns of the danger of getting too close to the sea at Peggy’s Cove in the eastern province of Nova Scotia. People do it anyway and some die.
Photo Credit: CBC

There is something that draws people to the ocean at Peggy’s Cove even though danger signs warn that rogue waves can and do wash them in and sweep them away. This famous landmark is in the eastern province of Nova Scotia, on the Atlantic Ocean and is visited by thousands of tourists every year. One person has died so far this year. Others have died before.

Controversy erupted after someone created a Twitter account that labels people “MoronsOfTheCove” and posted photos of people inside the danger zone. The person who wants to remain anonymous told the public broadcaster, CBC, that he “thought this was a humorous way to promote safety and awareness” and that he was “certainly not trying to victim blame anyone.”

In April, 25 year old Jamie Quattrocchi was swept into the sea and his body was never found. His mother doesn’t like the use of the word “moron” and says it is rude, degrading and judgmental. However, she does not think the tweet should be removed and approves of using social media to warn of the danger.

On July 2, a man fell into the water and was rescued by a tourist boat that was nearby.  Some say the area should be fenced off. But locals point out that hurricanes and high winds would pull down the barriers. Instead, they say people should just obey the signs.

When the sea is calm, it’s hard to see the danger and the temptation to go to the water’s edge is strong. But rogue waves can come up at any time and without warning.