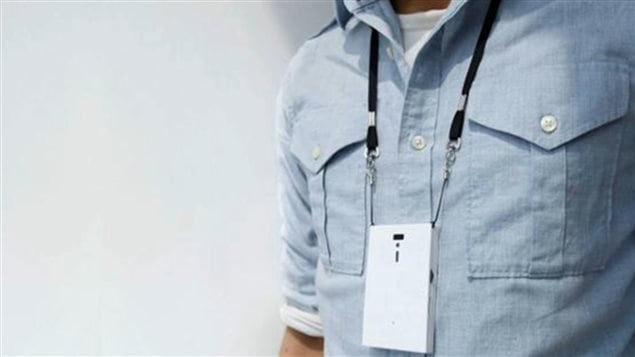 A Boston USA company ironically named "Humanyze" has developed a wearable ID device that collects data on 40 different variables related to behaviour and performance. The device collect data on virtually all of en employee's activity in 40 variables including: how much a worker is moving around, the tone of their voice and whether or not they leaned in when conversing with their co-workers.
Photo Credit: Humanyze

Is your boss becoming “Big Brother”?

Ever since the industrial age, business owners have been trying to increase efficiency.  Usually this was on the manufacturing floor, but now thanks to technology, it’s not only one the factory floor, where many jobs are simply being eliminated, now it’s everywhere from outside salesforce, to inside office work.

Technology has meant data capture is now fast, easy and cheap. All data.

The new techno buzz-word is “People analytics”…monitoring employees completely, from keystrokes to heartrates  and sometimes even outside of work.

Capturing key strokes on your computer, and random screen shots to see what sites office workers are viewing, are now common.  Technology  can monitor all everything an employee does, from all computer activity, all phone calls and how much time is spent on the phone, their whereabouts at all times, how often they speak, movements at their desk, and more

A US company “Humanyze” has now come up with an ID badge for employees that monitors voice and accelerometers. http://www.humanyze.com/

The recording measures tone of voice and how frequently you contribute to meetings, and time spent chatting with others, The accelerometer measures movements even at you desk.

Advantages and pitfalls of employee monitoring

Employee tracking in the case of someone working in a risky area can be an important safety measure, but in an office situation it can be seen as invasive.

Quoted by CBC in an article by Tara Kimura, a professor of organizational behaviour at Western University’s Ivey Business School, Kenneth Goh,  said that he is dubious that monitoring a worker’s personal time will help a company achieve its business goals.   He says that using data collection as a form of performance management could backfire and actually curb innovation.

“It becomes too Orwellian,” he said. “There have been studies to show that workers actually thrive when they have some degree of privacy. They do more trial-and-error learning, they’re more willing to make mistakes in private.”

Goh also says that the threat of hacking should give companies serious pause.

In particular, he suggests companies that give workers devices to wear around the clock may in fact be making themselves vulnerable in the realm of corporate espionage.

“It’s bad enough that we lose control of our identities with threats of identity theft,” he said. “I think it’s even worse if we lose the privacy of our actions, our movements, our physiological and emotional states. I think that’s the risk.”

In a related case, an American saleswoman for a company called Intermex Wire Transfer, has filed suit against the company for invasion of privacy, and wrongful dismissal as well as interfering with her ability to find work elsewhere.

Myrna Arias was told to download a tracking app  (XORA) to her phone and keep it on 24/7.

After she and others questioned whether employees would be monitored outide of work hours, the regional manager said they would, adding he even knew how fast Arias was driving at any given moment.  Arias said it felt like she was wearing a “house-arrest ankle bracelet”

Arias un-installed the app to protect her privacy and was fired shortly afterwards.

Her suit seeking $500,000 in damages will likely be heard sometime next year unless there is an out-of-court settlement, or the case is dismissed.