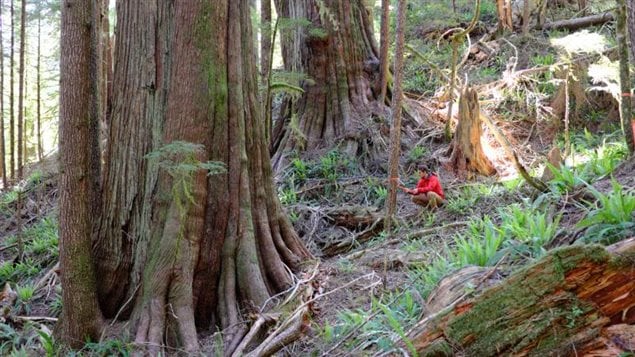 Unprotected old growth trees in a Teal Jones cutblock area. Some of the trees on Canada’s west coast date back as much as 1,000 years
Photo Credit: Ty Jones via Wilderness Committee

Well over twenty years ago, there was a sometimes bitter struggle on Canada’s west coast.

It pitted conservationists against logging companies, The conservationists, aboriginal groups, and other concerned individuals were blockading access roads and forestry equipment in their efforts to preserve the giant cedars, Douglas fir and redwoods in the ancient forests along the coast of Vancouver Island and the mainland..

On Vancouver Island, protests involved the Clayoquot Sound area near the town of Tofino, and further south around the Walbran River.

As a result of that protest, some protection was provided in a region around Clayoquot  (Tofino), and to the south, the Carmanah-Walbran Provincial Park was created in 1990. The battle there however seems like it might be set to resume.

A logging company, Teal Jones, has secured rights to log within areas of the Walbran River Valley just outside of the provincial park boundary.

Conservation groups say this is where some of the largest ancient trees are and the clearcut zones proposed would break up the contiguous forest right in the valley area.

The Surrey B.C. company had applied for eight logging zones in this area just outside the park, and one was in fact approved in September.

Now nearby communities are joining in the request to the British Columbia government to step in and preserve the giant ancient trees, some of which are “named” and remain in the unprotected area.

The city of Tofino and the Chamber of Commerce in Port Renfrew south of the Walbran, have released a statement asking the government to ban logging in the valley.

In an article byTerri Theodore of The Canadian Press , Chamber president Dan Hager said people come from around the world to see the giant forest and the most heavily visited areas are outside the park.  He is quoted saying, “It’s great for business. These trees are spectacular. There’s almost no place in the country where trees like this are accessible to the population.” He says tourism to see the natural beuaty, including the giant trees, has enormously boosted the local economies.

Tofino passed a resolution last week calling on added protection for Walbran and all old growth forest. Mayour Josie Osborne is also quoted saying. “”Tofino is one of the places in British Columbia that really can see the benefit of having protested the government’s plans for logging in an area and we’ve benefited from that”.

In a statement on the Wilderness Committee  website, campaigner Torrance Coste said “This type of old-growth forest is simply too rare to destroy, and the fact that the government isn’t responding to this crisis is shameful:”

The statement also says “We don’t want this to go to a blockade,” Coste said. “The provincial government has the ability to avoid that, and it’s time for them to step up—they need to rescind this permit and start engaging with the company, local First Nations and the public on alternatives.”

In an interview with the Victoria Times Colonist news this summer Teal-Jones Chief Financial Officer, Hanif Karmally said the company gave up 7,000 hectares of its licence in creation of the park, and protected areas leave only 11,080 hectares of its almost 60,000 hectare tree farm licence left available.. Karmally is quoted at the time as saying, further  reductions would be “detrimental” to the company.