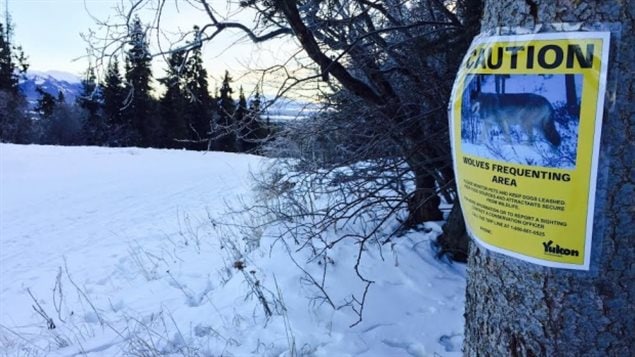 Signs warning of the presence of wolves have been posted in Whitehorse in the northern territory of Yukon.
Photo Credit: CBC

While Canada has abundant wildlife, it doesn’t usually make its way into cities and attack dogs or follow their owners. But for the last two weeks, wolves have been roaming the northern city of Whitehorse and exhibiting unusual behaviour.

While they were not happy about it, wildlife officials trapped and killed four wolves. They say that wolves had pursued someone who was walking their dog and that another dog was injured by a wolf.

‘Wolves are actually in residential areas’

“Wolves are actually in residential areas — literally on people’s lawns — and that is not typical behaviour for wolves, so we made a difficult decision that we had to do something to deal with the level of habituation that we were seeing,” said Kris Gustafson of Yukon Conservation Officer Services to CBC News.

There are probably at least two more wolves still roaming the town, says Gustafson. Cameras have been set up to try to ascertain where they are. Signs have been posted warning people of the wolves’ presence, to keep pets on a leash and to secure any food or other items that might attract them.

Hunger may be driving wolves

It’s not clear why the wolves have come to town, but Gustafson told CBC News it may have something to do with lighter than usual snowfalls in the area.  That may make it easier for animals to get away from the wolves, leaving them hungry.

In answer to questions as to why the wolves were not tranquilized and relocated, wildlife officers said that live trapping of wolves is extremely difficult and they would have had to relocate the entire pack into another pack’s home territory.