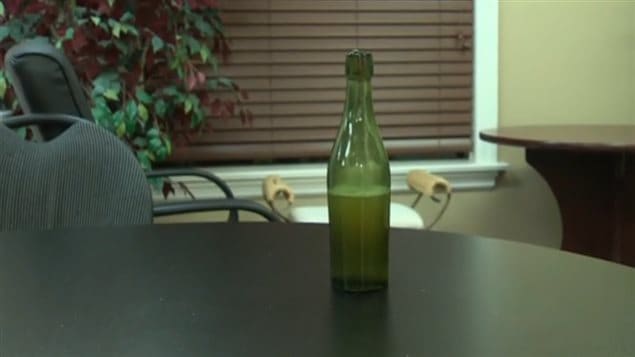 Ok so what is VOBBH- well, it’s “very old beer from the bottom of the harbour”.

Last November, scuba-diving enthusiast Jon Crouse was exploring the sea floor in the Northwest Arm of Halifax. Swishing his hands around in the silt and mud, he felt an object, pulled it out and found it was a small bottle, still about half full.

Later on the surface, and with the corked bottle cleaned up, one could see the name “A Keith’s Brewers” still visible on the cork through the bottle neck. Keith’s is a brewery name which still exists today.

Researching other markings on the bottle, Crouse was able to determine the bottle had been imported from a manufacturer in England between 1872 to 1890, making the beer at least 126 years old, almost as old as Canada itself.

At first Crouse was going to let the liquid evaporate naturally in order to preserve the cork still in the bottle, but a local bar owner said he’d pay to have the liquid analyzed.

A researcher at nearby Dalhousie University then offered to test the contents. Using a syringe (to preserve the cork) some liquid was drawn out, tested and found to in fact be beer.   Further testing showed it wouldn’t make anyone sick, so bar owner Chris Reynold tasted it.

Speaking to CBC news, he said, “It tasted, actually, just how it smelled, which I was surprised by,” said Reynolds. “We got like a little tree fruit note, a cherry note in there somehow — certainly a lot of sulphur, kind of rotten egg stuff going on.”
Now more analysis will take place in the lab at Dalhousie, and in another in Scotland.

“Once we’ve finished analyzing the liquid as thoroughly as possible, we can use that and dovetail that with brewers notes of the era, like brewer’s logs, and have basically the most complete picture yet of what some of Canada’s first beers may have been like,” said Reynolds.

A documentary film crew from “The Discovery Channel” was on hand for the testing and will air the episode on the show “Daily Planet” in the near future.

170 year old beer- gross!
The beer found in Halifax seems to have fared much better than five 170 year old beer bottles found in the Baltic in 2010.
The shipwreck from the early to mid 1800’s found near the Aland Islands of Finland also contained a number of bottles of Veuve Cliqout, Heidsieck and Juglar champagne, (a name which disappeared in 1829.)

In transporting the beer bottles to land one of them cracked, so a diver tasted the frothy liquid seeping through the crack and said it tasted sort of “beery”.   Later lab analysis showed it looked like beer, but over the decades bacteria must have changed both the smell and taste of the beer in the bottles analysed.

The verdict,, it smelled of a mixture of rotten cabbage, stinky cheese, goat, and burnt rubber. The taste? Well, vinegar, goat, and sour milk.
However the chemical analysis indicated that when the beers were fresh, they were probably pretty good, and not that much different than beer today.

As for the 145 bottles of champagne recovered, apparently they withstood the test of time somewhat better in the cold dark conditions of the sea floor. After tasting, 79 were deemed suitable and re-corked for auction.
In fact some wine companies are now experimenting with ageing their wines on the seafloor!.