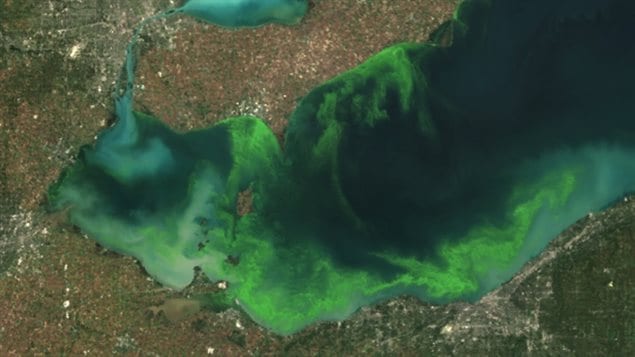 Satellite image of algae bloom on Lake Erie 2011 According to NOAA it was the worst in decades fed by phosphorus mainly from farm fertilizer runoff and sewage treatment plants, leaving behind toxins that have contributed to oxygen-deprived dead zones where fish can’t survive. The toxins can kill animals and sicken humans.Ohio’s fourth-largest city, Toledo, told residents late Saturday Aug. 2, 2014 not to drink from its water supply that was fouled by toxins possibly from algae on Lake Erie
Photo Credit: AP Photo/NOAA) (NOAA/Associated Press

A team of Canadian scientists have come up with a promising solution.

Diane Orihel (PhD) is the Banting and Liber Ero Postdoctoral Fellow, Department of Biology, University of Ottawa and lead author of the research.

Although blue-green algae (cyanobacteria) is ancient, it is only in recent years that it has begun to be a serious problem in lakes around the world

This is due to human activity from sewage from cities and from cottage septic systems, and phosphorus fertilizer run-off from farms.  Both the sewage and farm runoff act as fertilizer providing nutrients and promoting the growth of the bacteria.

Previous studies have shown that that high levels of microcystin, a common human liver toxin produced by cyanobacteria, is occurring in Canadian lakes and reservoirs from coast to coast

Not only is it toxic and can harm animals and humans who drink from these lakes, but as the massive amount of bacteria die and sink to the bottom, their decomposition takes oxygen from the lake creating dead zones or near dead zones, where fish and other acquatic life can’t survive.

Orihel’s idea was to counter the effect by adding iron which combines with the phosphorous thereby removing the main nutrients or “food” source for the bacteria.

By adding varying amounts of iron to the test mesocosms they were able to see the effects on the amount of algae bloom.

The results showed that the iron treatment significantly improved the lake water quality, reducing the phosphorus levels as well as the total amount of algae and potentially toxic cyanobacteria present

Orihel notes that iron is a naturally occurring element and as such is a “greener” solution to the algae blooms than some other proposals involving exotic chemicals. However she notes that this treatment, while successful, should be used in conjunction with efforts to reduce pollution and external nutrient loading. This means better sewage treatment, fixing leaking septic tanks, restoring wetlands and riparian areas, banning cosmetic fertilizer use, and minimizing essential fertilizer applications in agricultural situations, especially near water courses.

Orihel is continuing her research with the next phase involving larger scale trials in what are known as agricultural dugouts, basically large reservoirs or ponds on farms.