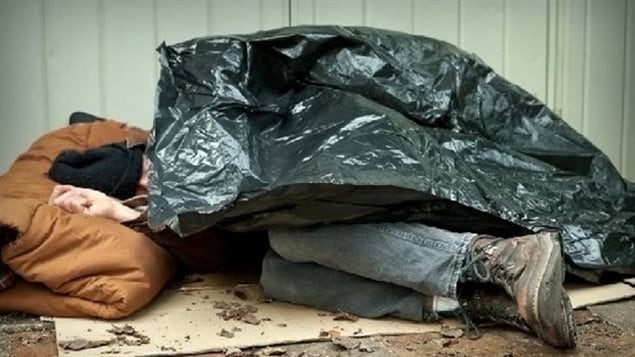 An estimated 35,800 young Canadians are homeless each year. They have trouble finding good jobs and affordable housing.
Photo Credit: CBC

The biggest driver of youth homelessness is poverty, followed by family conflict or abuse, according to an analysis of studies from 24 countries. Delinquency was the reason least cited by young people.

The study of 13,559 young people was led by a researcher at the University of Toronto. It found 39 per cent of youth and children listed poverty as the main reason they were living on the street. Family conflict was given as the reason by 32 per cent, and abuse was cited by 26 per cent.

Many homeless youth have experienced abuse

In Canada, an estimated 35,800 young people are homeless each year. Studies suggest family conflict is the main reason they leave home. “We know from research here that over 95 per cent of young people identify conflict as being what made them leave home,” says Stephen Gaetz, a professor at York University and director of the Canadian Observatory on Homelessness, a non-profit research institute.

“We’re not talking about disagreements with parents or frivolous kinds of things…We’re talking about fairly serious things levels of conflict that make it impossible to stay at home.” Gaetz adds that research shows between 60 and 70 per cent of homeless youth report having experienced physical, sexual or emotional abuse at home.

Once they leave, it becomes difficult for them to pay for their own shelter because there is a lack of affordable housing and a lack of good jobs, says Gaetz. He adds that once they are homeless, young people are more likely to experience exploitation, pressure to work in the sex trade, assault and criminal acts. The trauma can lead to mental health problems, depression, attempted suicide self-medication and addiction.

The studies are important, says Gaetz, “because if we believe, in Canada, that it’s okay to let young people stay homeless and bootstrap themselves out of homelessness, we’re actually creating a real problem. We’re putting young people in harm’s way. We’re contributing to what may be life-long problems if we don’t do something, do things differently.”