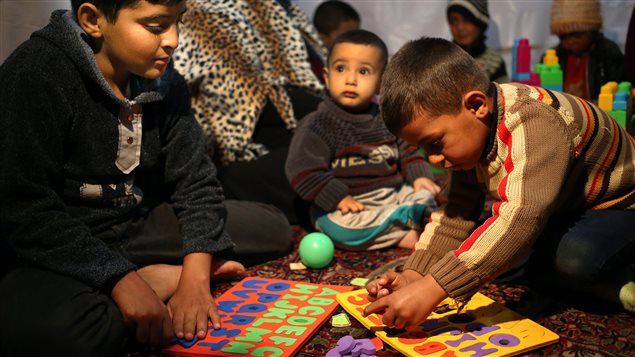 Syrian refugee children have a lesson in a refugee camp in the eastern Bekaa valley in Lebanon in March 2014. Canada’s minister of international development said today “we cannot afford to lose the potential of an entire generation of young Syrians” for a lack of education and opportunities.
Photo Credit: Hussein Malla/AP Photo/file

The Canadian government announced it will contribute $100 million to help communities stricken by the Syrian crisis.

Private citizens responded to campaigns by charitable organizations and donated $31.8 million. As promised, the government will match that amount and give it to UNICEF to provide education and child protection services in Syria and Jordan.  It will also aid efforts to vaccinate children in Syria.

The balance of the government contribution–$68.2 million—will be given to “trusted Canadian and international partners” who work in Iraq, Syria, Jordan and Lebanon providing shelter, food, water and health care to those affected by the Syrian conflict.