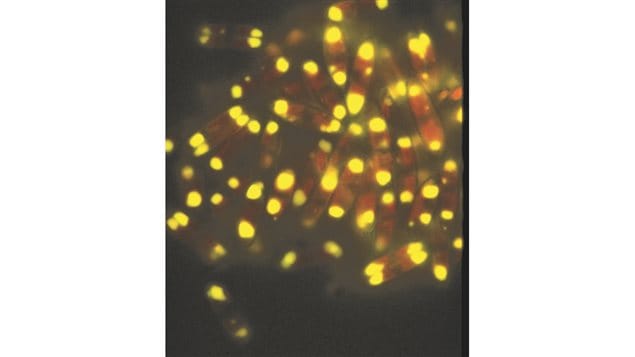 Tiny diatoms (species name: Nitzschia palea), stained to reveal lipids (comprised mainly of fatty acids) stored in the cell. They produce the vital omega fatty acid compounds and are eaten by tiny marine creatures, in turn eaten by small fish and sho on up the food chain until eaten by man to obtain these vital compounds
Photo Credit: Michael Arrts-Ryerson

Humans, and indeed all invertebrates, absolutely need Omega 3 fatty acids, such as EPA (eicosapentaenoic acid) and DHA (docosahexaenoic acid).  These are needed for brain, vision, reproduction and cardio development and more.

But, we don’t produce these in our bodies; we need them from our diet, and that means fish and fish oil.

They in turn get it from algae and tiny diatoms in the water which create the compounds.

And therein lies the concern with warming.

Stefanie Hixson (PhD) is a research associate in the Department of Chemistry and Biology, at Toronto’s Ryerson University,

Ms. Hixson  is the lead author of a paper published in the science journal Global Change Biology with the title, “Climate warming is predicted to reduce omega-3, long-chain, polyunsaturated fatty acid production in phytoplankton”

Using computer modelling and well-researched and the “conservative” peer-reviewed estimates from the IPCC (Intergovernmental Panel on Climate Change) they found that a 2.5 degree Celsius increase in water temperature could reduce EPA production by over 8 percent globally, and DHA by over 27 percent globally

The research was conducted by first compiling data from the literature for EPA and DHA levels in different species of algae from around the world, at specific temperatures. This large data set was then used to predict the levels of DHA and EPA in algae with certain increases in temperature based on climate change models.

As lakes tend to warm faster, this production may have a more immediate effect on fresh water systems and animals that depend on them.

Stefanie Hixson also says that because the compounds are needed in reproduction, there may be a negative effect upon fish stocks even as the world needs more fish to feed a growing population.

She notes that although humans may possibly be able to overcome a shortage or lowering of Omega acids in diet through technology, animals cannot seek alternatives and there may be unknown effects throughout the environment and ecosystems.