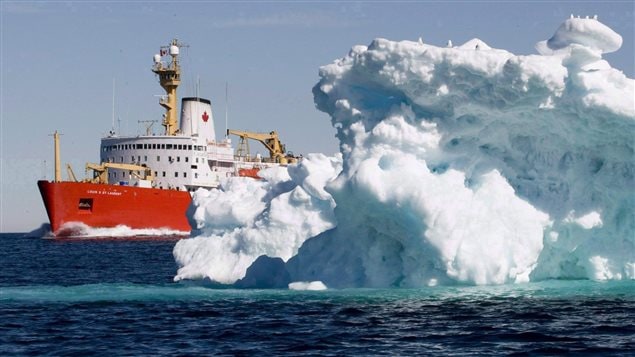 A Canadian Coast Guard icebreaker sails through Lancaster Sound, Nunavut on July 11, 2008. Conservationists want to remove obstacles to it being made a marine conservation area.
Photo Credit: Jonathan Hayward/Canadian Press

The World Wildlife Fund has gone to court to try to kill old permits for gas and oil exploration in Lancaster Sound, in the northern territory of Nunavut. The conservation group says the permits awarded to Shell decades ago present an obstacle to the long-planned creation of a marine conservation area.

‘A very biodiverse area…very important to the local Inuit’

Lawsuit is ‘a kind of last resort’

Lawyers have gone to Federal Court to ask that the judge confirm the permits for exploration on the border of the proposed conservation area have expired, and that the government be obliged to update its registry records in the Canada Petroleum Resources Act to show that.

“This lawsuit is kind of a last resort effort to clarify the status of these permits and sort of remove that obstacle to the finalization of the protected area,” says Miron.