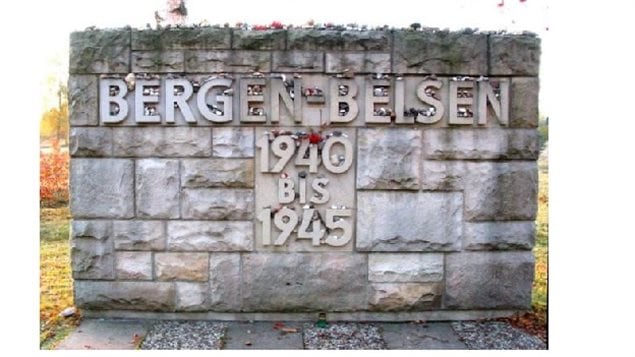 2003: Memorial stone at the entrance to the former concentration camp where tens of thousands died of disease , starvation, or were murdered.
Photo Credit: wiki-Arne List

Located in north Germany about half way between the port city of Hamburg, and Hanover, in April 1945, the huge Bergen-Belson concentration camp was in the middle of the war zone.

Following several days of negotiations between the Allies and Germans, the camp was declared a neutral zone and would be turned over to the Allies peacefully.

On April 15, British forces augmented by Canadians, entered the camp only to be horrified at what they found.

Immediate efforts were made to try to save the some 60,000 starving and sick, and deal with some 13,000 bodies littering the camp.

In spite of heroic efforts, there were still hundreds of deaths a day from the effects of disease and starvation. About 14,000 prisoners died in the month following liberation.

Camp director, Josef Kramer, who had held posts in a number of concentration and death camps, was tried as a war criminal and hanged in Hamelin jail on December 13, 1945.