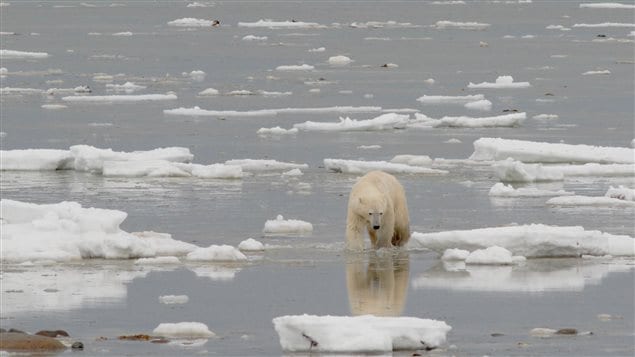 It’s a previously unknown side effect of global warming but it’s simply a case of putting a couple of known factors together for the first time.

We know Arctic sea-ice is retreating, and we know polar bears need the ice to hunt. The new study shows they are swimming more often, and that’s not really good for them.

Co-author of a new study, Andrew Derocher (PhD), is a professor in the Department of Biological Sciences at the University of Alberta.

The new study is called “Migratory response of polar bears to sea ice loss: to swim or not to swim” and it has just been published in the peer-reviewed journal Ecography.

Derocher, has been studying polar bears for more than three decades. He says they are great swimmers, but prefer not to.

He notes that because the ice is shrinking the bears are now more often making epic swims of up to 50 kilometres and more to reach ice, or come back to land. In fact, one bear swam 400 km almost non-stop over nine days.

The bears in Hudson Bay and the Beaufort Sea in the Arctic were tracked using satellite-linked telemetry.

“When I started studying polar bears in 1984, sea ice in the Beaufort Sea was visible from shore year round,” says Derocher. “In recent years, the ice has retreated several hundred kilometres offshore by September and it’s a much more challenging habitat for the bears to live in.”

Any of these long swims requires a great deal of energy, and for young and old bears, or if undernourished or weak, it can prove to be a fatal expenditure of energy.

“While polar bears as a species are eminently suited to swimming, not all bears are equally able to swim long distances,” explains Derocher. “The youngest, oldest, and skinniest bears are much more vulnerable to drowning. With more open water, we can expect increased mortality associated with more long distance swimming.”

Professor Derocher says it’s possible the need to make these long swims could be having an effect on some of the Arctic’s bear population, if young bears are perishing on such trips, this would affect the population being replenished.