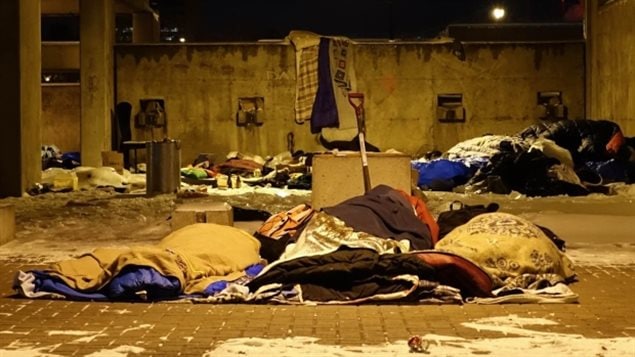 Viger Square in downtown Montreal is a popular spot for the city's homeless. Many choose to sleep outside rather than in shelters, even when the temperatures drop to beyond freezing.
Photo Credit: Simon-Marc Charron

Homeless people in Montreal have been getting more positive attention since Denis Coderre became Mayor. In his latest move, the mayor has now appointed an “advocate”.

Serge Lareault is the man Denis Coderre chose, to be the protector of the homeless. Lareault is well-placed to fulfill the mandate as he’s been working with homeless people in Montreal for over 20 years.

In 1994 Lareault started the magazine,’L’Itineraire’, to help raise money and awareness of the issues around homelessness. People mocked his efforts in the beginning, telling him it would never work, but the magazine is now available in 40 cities around the world.

Lareault eventually became president of the international federation of street papers and visited many cities, meeting mayors and councils and seeing the variety of ways homelessness was dealt with.

“a link between the homeless and the system”

“Homelessness is not only an individual tragedy, but it’s also a social tragedy,” Lareault told reporters Monday at a news conference at Montreal’s City Hall, alongside Mayor Denis Coderre.

“Across the western world, in our cities and wealthy, modern societies, the number of homeless are increasing. More and more people are falling through the cracks.”

Soon after being elected mayor in 2013 Denis Coderre identified homelessness as a major issue he wanted to address. A survey was organized to find out how many people were actually living on Montreal streets, or with no home.

This past December Coderre announced plans to hire an advocate, a position he described as a “protector”. He said the advocate will be “a link between the homeless and the system”. He wanted someone who would work on the ground with people living on the streets. The move is part of the city’s $36.9 million (Cdn) five-year plan to get 2000 people settled and off the streets.

Lareault said Montreal has the resources to help the city’s homeless, it’s co-ordinating these services, groups and governments that is the challenge.

“With a global vision and leadership, we can reduce suffering in the streets,” he said. “I hope to be that leader.”

“Cities that approach homelessness in a methodical, global way have been incredibly successful and have reduced the number of people on the streets in a massive way.”

“I think we can make Montreal a city where everyone can live well,” Lareault said.