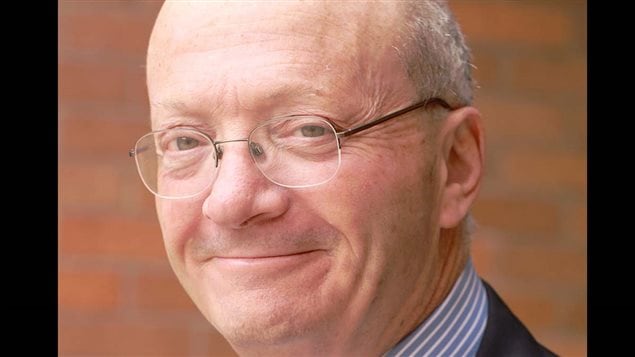 Hugh Segal, former head of the Senate Committe on Foreign Affairs, has a new book that could guide the new government in its policies. 'Two Freedoms: Canada's Global Future.
Photo Credit: Jake Wright

The poorest countries in the world are the most violent.

He is also a would be politician, having run for the leadership of the federal Conservative party in 1998. He’s comfortable in back rooms. From this experience and the variety of vantage points he’s enjoyed internationally, he’s challenging Canada in his latest book.

‘Two Freedoms: Canada’s Global Future’, is a call to action to focus on two priorities, freedom from fear and freedom from want.

He says Canada should be doing more. Investing in creating job opportunities in Gaza, for example. While security concerns may be paramount, without raising the standards of living of the poorest people there will be no security. The poorest countries in the world are the most violent, he says. He suggests co-ops could be established, housing is an acute need and Canada could be working with the Palestinian diaspora.

Segal commends the direction of the new federal government in its intent to re-engage with the United Nations. But beyond ambitions of a seat on the Security Council, he insists it’s time to expand our capacity with the agencies. The UNHCR, at a time when the global refugee crisis is of historic proportions, or contributing more to the World Food Organization, when renewed fears of starvation in Ethiopia is a reality once again, are key priorities.

He says these agencies, on the frontlines of the most challenging situations, deserve as much support as we can generate. He notes we are still not spending the 0.7 per cent that Canada’s former Prime Minister, Mike Pearson, established.

“You don’t achieve peace by only negotiating with your friends”

Regarding the recent controversy within Canada over the government’s approval of the sale of light armoured vehicles to Saudi Arabia, Hugh Segal sees it as “a bit contrived”. He points out the few objections to trade with China. The Chinese government executed 1300 people last year. Saudi Arabia executed 79 people. It’s all terrible he says, but freedom from fear is really about the balance of power.