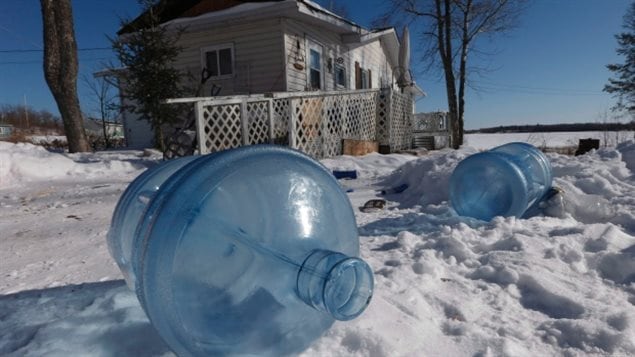 Empty 20 litre water bottles sit outside a house on Shoal Lake 40, waiting for pick up. Despite supplying water to the city of Winnipeg, the community has been under a boil water advisory for 19 years.
Photo Credit: CP Photo / John Woods

Prime Minister Justin Trudeau visited a troubled First Nation on Thursday as he continues his efforts to reset Canada’s relationship with its indigenous peoples.

Trudeau spent seven hours on the Shoal Lake 40 First Nation that has been under a boil water advisory for 19 years.

He hauled bottled water to homes, visited school children, attended a hockey game at the local arena and promised to partner with the community and respect treaty obligations.

Shoal Lake 40, built on a man-made island, was cut off from the mainland over 100 years ago during the construction of an aqueduct that carries fresh water to Winnipeg.

Ottawa, Manitoba and the City of Winnipeg recently committed to building a road to Shoal Lake from the Trans-Canada-Highway that would allow a water treatment plant to be built.

The Shoal Lake 40 First Nation is an Ojibwa or Ontario Saulteaux First Nation. It is located in the Eastman Region of Manitoba and the Kenora District of Ontario. The total registered population in August 2011 was 568, of which the on-reserve population was 266.

According to the 2011 census, Aboriginal people in Canada (First Nations, Inuit and Métis) totaled 1,400,685, about 4.23 per cent of the national population.