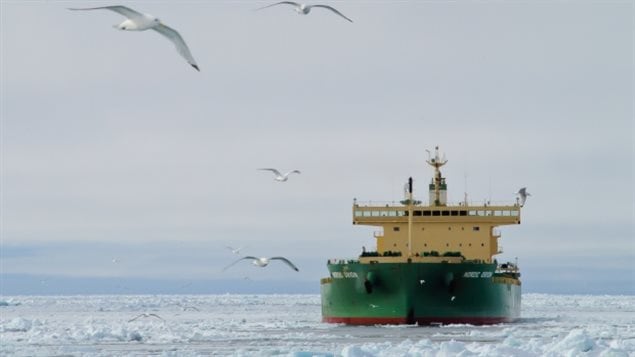 The Nordic Orion made history in September 2014 when it hauled 15,000 tonnes of coal to Finland from Vancouver through the Northwest Passage.
Photo Credit: Courtesy Nordic Bulk Carriers

While the Northwest Passage is a long way away from becoming a commercially viable maritime shipping route, even a moderate increase in shipping through Canada’s Arctic waters has the potential to change Ottawa’s relationship with its Asian trading partners, especially China, argues a newly released paper.

There has been a lot of media hype about the utility of the Northwest Passage as a regular, viable shipping route, says Hugh Stephens, an executive fellow at the University of Calgary’s School of Public Policy and the author of a research paper entitled The Opening of the Northern Sea Routes: The Implications for Global Shipping and for Canada’s Relations with Asia.

“There was a great flash of enthusiasm,” Stephens says, “but the facts haven’t really borne this out. In fact shipping levels reached a peak in 2013 and they dropped from there.”

Despite the undeniable trend toward a shrinking polar ice cap and significant savings in distance offered by shipping goods through the Northwest Passage and its sister Northern Sea Route along Russia’s Siberian coast, the Arctic remains a dangerous and unpredictable environment, says Stephens.

“That doesn’t mean that Canada a) should be neglecting this route and b) should not be taking advantage of its geographical positioning,” Stephens says.

Canada should use its geographic position and its membership in the Arctic Council to deepen its trade relationship with its Asian trading partners, particularly China, which seeks to cement its role as a global player, argues Stephens, a former high-ranking Canadian diplomat specializing in Asia.

“This is a natural area where Canada and China, and indeed Japan and Korea can develop some unique bilateral cooperation,” Stephens says. “Canada is a key player in the Arctic and it’s a perfect opportunity for Canada to take a lead in developing its Asian dimension through the lenses of its Arctic presence.”

There are still advantages that might draw some shipping away from traditional routes to the maritime corridor snaking through Canada’s Arctic archipelago, particularly for the movement of western resources to growing Asian markets, he says.

“That won’t be necessarily year around but I think there will a considerable growth of shipping there,” Stephens says. “That offers some economic opportunities for Canada but also offers us some challenges in terms of making it a viable and safe route.”