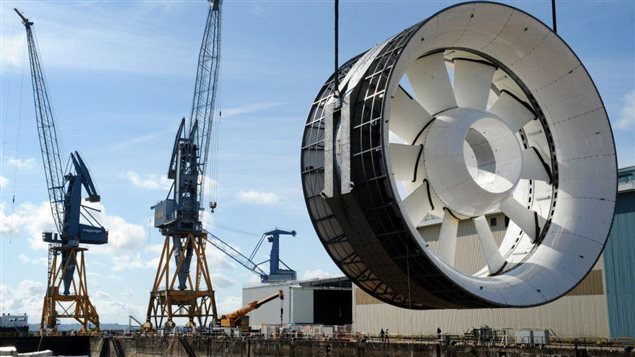 This is the scene of an in-stream tidal turbine being installed in Nova Scotia's Bay of Fundy. This technology is supported the World Wildlife Fund of Canada, and there are now four ready to operate on the sea floor.
Photo Credit: DCNS

Nova Scotia is becoming one of the greenest provinces in Canada. It is in the process of transforming from its former fossil fuel base, to renewable energy, and tidal power from the Bay of Fundy is playing a key role.

Five years ago the province established targets to move to renewable energy with the first benchmark of 25 per cent by 2015 already achieved. The next is 40 per cent renewable by 2020.

Michel Samson, the province’s energy minister, announced an “enhanced environmental monitoring program” yesterday, to assess the effect tidal energy may have on the fish in the Bay of Fundy, in consultation with Fisheries and Oceans Canada, as well as First Nations, independent scientific experts and representatives from local fisheries

Water speed is the name of the game in tidal power

In a piece in the province’s Chronicle Herald newspaper, Samson talked about the potential of tidal power. He wrote, “the tides that flow through the Bay of Fundy can support the development of clean, renewable power and a new Nova Scotia industry, estimated to be worth up to $1.7 billion.

Matt Lumley, of the Fundy Ocean Research Centre for Energy (FORCE), explained that the decision was made to use ‘in-stream tidal technology’ as the least invasive to marine life. It works, as he says, “just sitting on the sea floor passively collecting the kinetic energy from the flow of the tide.”

Lumley goes on to explain: “Even though the Bay of Fundy is home to the highest tides in the world, what’s actually relevant to our project is the fact that you’ve got 160 billion tons of water in the Bay of Fundy moving up into this section called the Minas Passage, where the coastline pinches in, and the water speed moves from 1 to 2 metres a second up to 5 metres a second and higher, and when that happens you get energy density.”

‘There’s big and small opportunities all over the world’

There are similar projects in the works in the United Kingdom, in France and in British Columbia on Canada’s west coast. Lumley says there also work underway in a Manitoba test centre where the same technology can be used for “run of river” projects. He says there is keen interest from remote areas currently using diesel as a power source, but small-scale tidal can be priced competitively.

FORCE has been monitoring the effects on marine life, but Lumley says the Minas Passage is a challenging site to work in. He describes the conditions as equivalent to a class 4 hurricane, so acquiring data is a major challenge.

Research elsewhere in the the world has suggested that the effect of in-stream tidal is minimal, that fish simply avoid the area, however, Lumley says the unique characteristics of the Minas Passage with so much water moving so fast, necessitate gathering more accurate data.

Otherwise, all the elements are in place…” the sub-sea and on-shore infrastructure has been built… four power cables running along the sea floor… a purpose-built sub-station, ten kilometres of overhead transmission line connecting us to the power-grid… and most recently the province created a feed-in tarriff… a fixed price for energy… they’ve given turbine makers a market, a price that they can finance their projects with,” Lumley says.

“We expect to see the first of our four developers connecting to the grid sometime this year.” he says. The first 20 megawatts will be used within Nova Scotia in keeping with the 2020 target, but there are possibilities of export in the future.