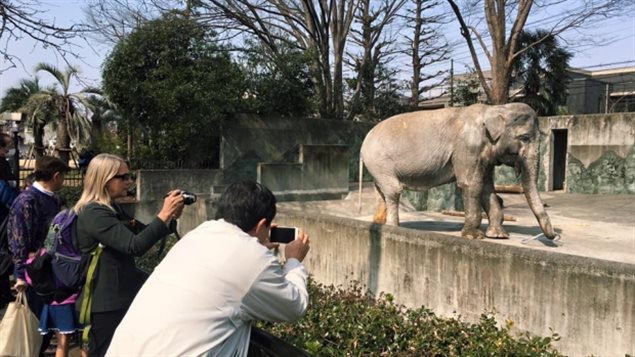 A Canadian blogger told of Hanako’s story which brought the issue to world attention. Now she hopes the story will lead to more action to remove other captive elephants from zooz and place them in sanctuaries.
Photo Credit: Nakagawa

Hanako, meaning ‘flower child’ has died in her enclosure in Japan.

Hanako, a female elephant was a gift from the Thai government to Japan and had lived at Tokyo zoo since the age of two.

A few years ago Canadian visitor to Japan was deeply saddened to see the condition the elephant was living in.  Ulara Nakagawa of Vancouver said elephants are social animals but Hanako had spent her entire life alone, and in hard concrete enclosure without dirt, grass or water to wade in.

After her visit, Nakagawa wrote in her blog about the conditions the elephant had been enduring for decades. That led to people calling Hanako the world’s loneliest elephant, and to an international petition to have the elephant moved to a Thai sanctuary. It was hoped she could end her days in more natural surroundings and in the company of other elephants.

However, the zoo and an independent expert said the elephant was too old to move and a new environment and other elephants would frighten her.

For her part Nakagawa hoped the elephant’s story would change attitudes about keeping the animals in captivity.

Quoted by the Associated Press, Nakagawa wrote, “I hope that Hanako’s legacy will be to inspire her fans in Japan and elsewhere to better educate themselves on elephant welfare and work to expose and improve the living conditions of the many other captive zoo elephants who need us.  Rest in peace, Hanako. You will not be forgotten.”