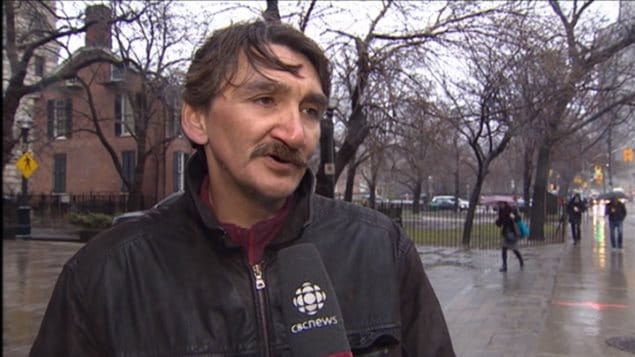 Jerry Natanine, then mayor of Clyde River, Nunavut, heads into a Federal Appeals Court hearing in Toronto on seismic testing in April. He continues to lead opposition to seismic tests and will take the case to the Supreme Court in November
Photo Credit: Robert Parker

In 2011 a consortium of Norwegian oil companies applied for seismic exploration of the seabed off the coast of Canada’s Baffin Island.

Since then, Inuit residents of the region have bitterly contested the proposal saying it could threaten marine animals and their own way of life.

In 2014 the National Energy Board (NEB) granted the consortium a five year permit.  The Inuit residents of the area continue to say the NEB did not properly consult with them before granting the permits and have challenged the decision in court.

Seismic tests involve high intensity sonic blasts through the ocean and deep into the ocean floor beneath. The reflected sound is then measured to determine if there are reserves of oil or gas underneath the seabed.

The Inuit say the testing will harm the marine life they traditionally rely upon for sustenance.  They say the constant underwater air blasting every ten to fifteen seconds, which can be as loud as explosives, will chase away marine life, and may harm and possibly even kill some.

After losing an appeal at the Federal Court level, the residents of the northern hamlet of Clyde River and other intervenors have appealed to the Supreme Court of Canada  (SCC) which has since agreed to hear the case.  The two sides will appear before the court on November 30.

Now more weight is being put behind the effort to block such ocean exploration. Although not directly related to the Canadian situation, over two dozen American marine scientists have written an open letter denouncing the practice.

In April they wrote an open letter to U.S. President Obama asking to stop seismic tests off U.S. coasts which could harm the already threatened right whale.

We, the undersigned, are marine biologists with specific expertise on the North Atlantic right whale. We are writing out of profound concern over the impacts on this species from the introduction of seismic surveys for oil and gas exploration in the mid and south-Atlantic planning areas –

After delaying for two years, the Norwegian companies say testing which they had scheduled off Canada’s coast with the summer shipping season will be delayed again this year. That announcement was made shortly after the SCC agreed to hear the case.
Earlier this year in the U.S.  President Obama ruled out drilling for oil and gas off the East Coast in the next round of federal offshore leases, but did not rule out seismic testing. This past week several events were organized along the South Carolina coast by groups opposed to seismic tests. These included Oceana, Don’t Drill Lowcountry, and the Southern Alliance for Clean Energy.