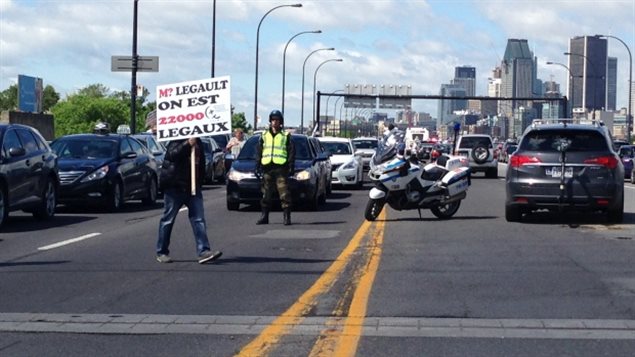 Taxi drivers protest delays to Bill 100 which will even the playing field, regulating ride-sharing service such as Uber.
Photo Credit: CBC / Lauren McCallum

Taxi drivers blocked a bridge off the island of Montreal today to protest stalling tactics. Nearly 1,000 drivers from around the province took part in the blockade near the site of this weekend’s Formula 1 Grand Prix race.

They gathered in support of the Quebec government’s Bill 100, the proposed legislation to regulate ride-hailing services like Uber.

With cars parked, and drivers convening in groups as traffic moved slowly along the other available lane, the taxi industry was reminding the government of its vow to disrupt major public events if Uber is not regulated before the provincial National Assembly recesses for the summer.

Opposition leader, Francois Legault, of the Coalition Avenir Québec was targetted for his efforts to stall the passage of Bill 100. He claims that Bill 100 will punish consumers in Quebec, if Uber is forced out of the province.

Uber has suggested several compromises to the proposed rules established in Bill 100, but the Quebec government not open to negotiating.